Nights Among the Brocken Spectres 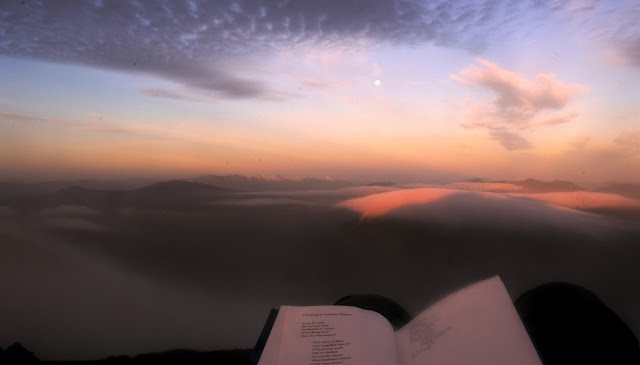 May means university exams: on campus most weekdays and marking hard at weekends. Although it's usually possible to get away for a few days (the hardest work tends to collect in a few intense bursts), weather and leisure never synchronised this time round. Feels very odd that I had time to do this at the same time last year.

So I've been taking trips to remind myself that, when nights are short, it is possible to do most of a day's work in Birmingham and be on top of mountains before sundown. If I decamp an hour or two after dawn, I can even be at my desk again mid-morning. This leaves just enough outdoors time to change pace, do some thinking-walking and to dig into books that need time to appreciate. Such trips mean being in the hills for the golden hours of sunset/dawn and for starlit nights (mid-day is boring anyway).

I've found several places I like for these ventures. My Nemo bivi got its first mountain test on the eastern edge of Snowdonia... 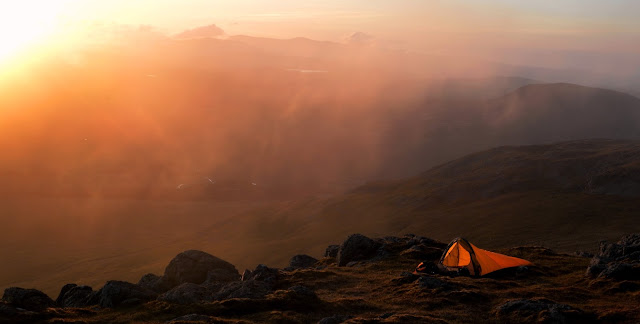 ...while I've made repeated returns to the wonderful Aran range (another eastern outcrop of Snowdonia, just south of Bala): 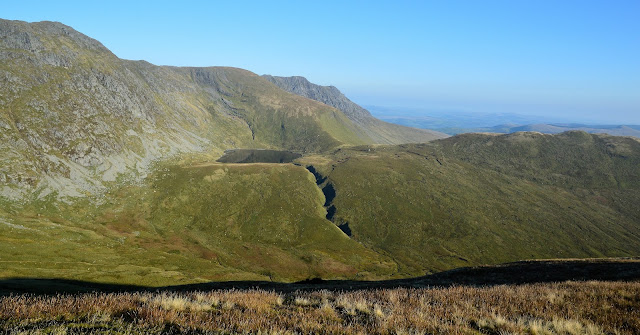 The highest point in this range, Aran Fawddwy, has some wonderful airy spots to sleep: 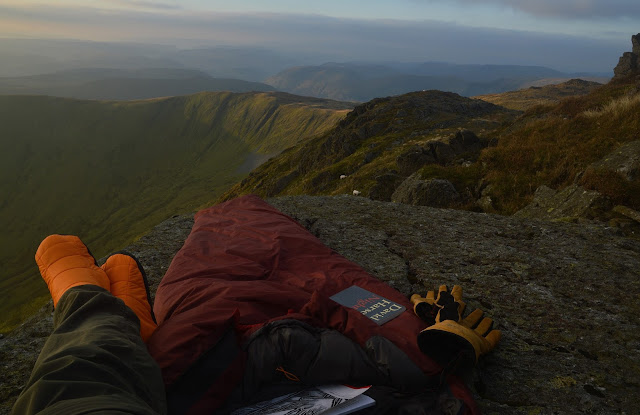 Another favourite choice, and my destination earlier this week, is the Arenigs. The painters Augustus John & James Dickson Innes once tried to found an artistic movement called The Arenig Group, so these mountains are well represented in art history. Here's a luminous 1913 likeness of the mountain by Dickson Innes (who buried correspondence with the life-long love who'd spurned him at the summit): 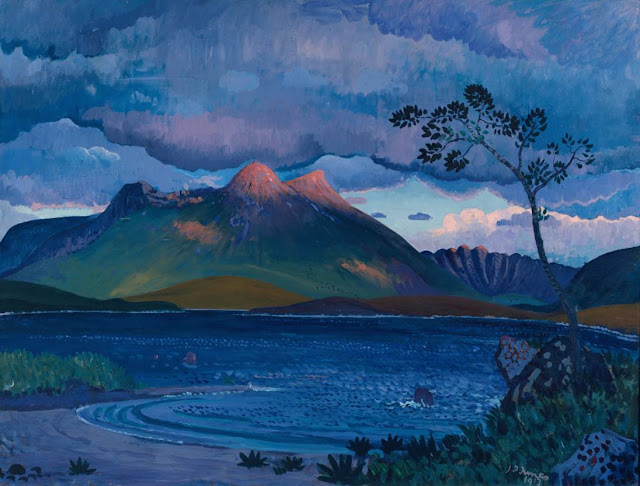 And here's a blogpost about Dickson Innes from the Footless Crow. These artists came here to de-urbanise: in Augustus John's words 'one has a lot to unlearn before the instinct or the soul or whatever you call it can shine out uninstructed'.
This unseasonably cold May/early June was a great time to visit so atmospheric a spot: the strange weather has resulted in mornings of broken blankets of cloud far below the summits. Each night alternated clear skies with billowing, mountain-draping cloud which then gave way to beautiful dawns haunted by bands of roving brocken spectres (more on these later). This has created dramatic conditions for hanging around up mountains.

I can never resist carrying some historical-theoretical reading that I ought to have read before (this time Henri Lefebvre's Rhythmanalysis) which will lodge itself better in the mind if read somewhere memorable. But on the last few trips that's been taken home unread. That's because I've recently discovered an excellent Sheffield publisher, Longbarrow Press, whose output is accompanying all my trips. Over the last few years they've been producing extraordinary amounts of high-quality landscape-sensitive poetry. Last time, I took Mark Goodwin's Steps and this time carried Matthew Clegg's The Navigators. Some of Clegg's poems, such as 'Climbing to Another Climate', couldn't have been more perfect for the occasion (although my copy's still damp from its hours immersed in cloud). One attraction of Longbarrow is that books come with sound and literature recordings that, played in the car, begin the step into a different mindset even before venturing out onto the hills.

Tentless and biviless, I put the sleeping bag down on the peak in time for dinner (accompanied by Arenig Fawr's ravens and a cuckoo in Beudy'r Cwm below). 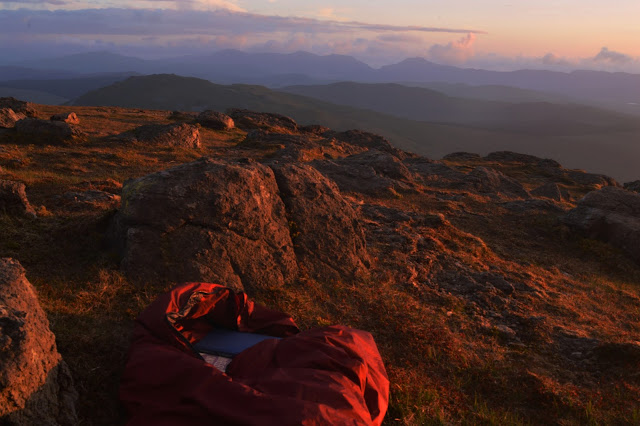 Sun descending fast, I was just early enough to need my boot as a sunguard for reading: 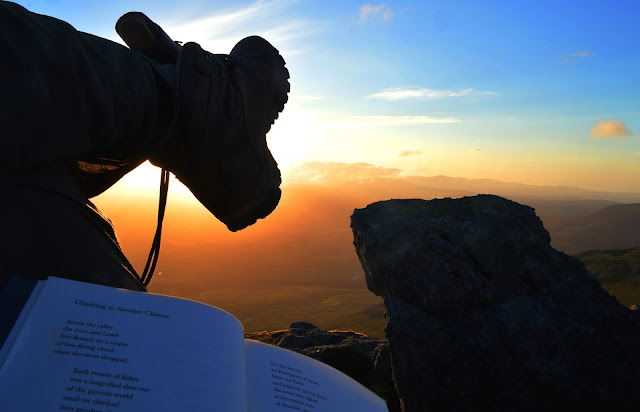 This spot had views of some of my favourite Welsh hills, the Rhinogs, in the distance (I used to bivi by the side of a small llyn in these mountains - where I first read many 19thC books that went into my PhD - unaware its Welsh name translated as 'Lake of the Maiden Suicides'): 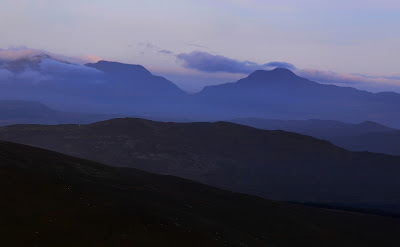 A wedge of thick white Atlantic cloud soon blew in, leaving Arenig Fawr untouched but closing off views across Snowdonia.

The night that followed was cold and beautiful, with a perfect sky of stars before the moon rose. But dawn was the real glory. Sitting by the spot I'd slept in, reading over 5am breakfast, this mountain and every other were swept by white cloud pouring up out of the valleys like waterfalls in reverse. Between clouds, the views were simply glorious: 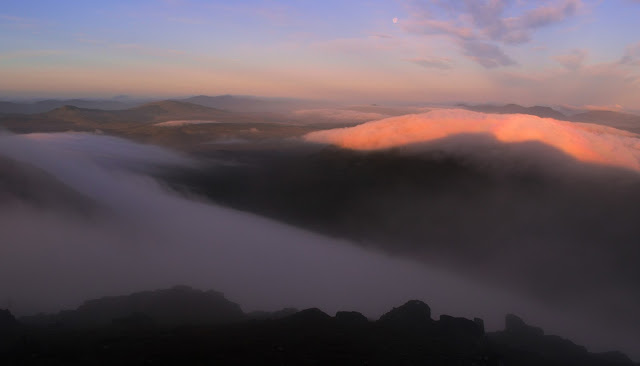 It was early in this parade of incoming cloud that brocken spectres began to leap from between the crags. These are freakish mountain phenomena. With low sun behind and broken cloud in front, these spectres are a composite shadow, built through layers of mist. Refraction creates what's known as a 'glory' around them. This glory inverts the colours of the rainbow and can only be seen by the person whose shadow is cast. Three things make these spectres unnerving: they look huge but change in size (dolly-zoom like), they're more 3D than other shadows, and because they're cast on shifting cloud they give the impression of movement (it's like spotting your shadow moving when you're not). Those I've seen before have loomed from the mist and been gone almost instantly, but today a few were stable enough to photograph: 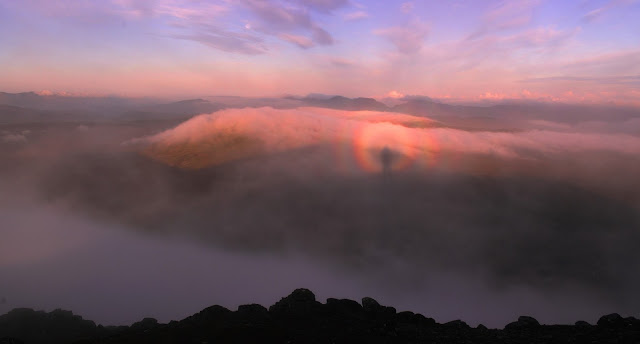 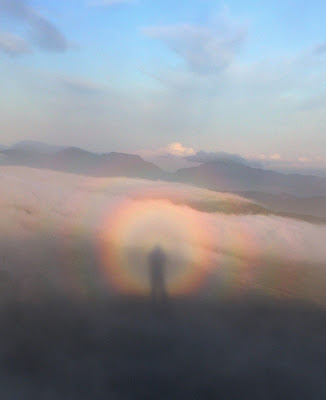 The weirdness of brocken spectres means lots of writers have used them to evoke paranoia or to symbolise the delusions of earthly things in contrast to supposed religious certainty. With their inverted colours, they sometimes stand for the opposite of the 'hope' that rainbows symbolise. Brocken spectres appear in James Hogg's gothic Private Memoirs and Confessions of a Justified Sinner and Thomas Pynchon's postmodern Gravity's Rainbow. They're named after the highest mountain in Saxony's Harz mountains (the Brocken), where Goethe set the witches' dance in Faust. But their most famous appearance is probably the end of Samuel Taylor Coleridge's 'Constancy to an Ideal Object':

And art thou nothing? Such thou art, as when
The woodman winding westward up the glen
At wintry dawn, where o'er the sheep-track's maze
The viewless snow-mist weaves a glist'ning haze,
Sees full before him, gliding without tread,
An image with a glory round its head;
The enamoured rustic worships its fair hues,
Nor knows he makes the shadow, he pursues!

It felt very odd to be encountering Coleridge's spectres at dawn yet to be marking The Trickster Prince's 3rd year course on histories of sexuality at lunchtime. By strange coincidence, I hear he and Sarah will soon have a James Dickson Innes Arenig picture on the wall of their new home...


On Arenig I'd accidentally read some lines from the last third of The Navigators, a sequence entitled 'Cave Time and Sea Changes'. Watching shadows of cloud career across broken ground, this had rung true :


are stampeding over fields and barn roofs,


I'd been meaning to save this sequence for a trip to Caldey Island a few days later (with marking finally finished). 'Cave Time...' is the most memorable part of the collection, full of precise ocean observation and vivid conjuring of moments in the life of rock pools, bird shit and weather-gnawed chalk pebbles ('where whiskery sea lice furbish their hovels'). I decided not to write the trip up in great detail, but here are some photos and captions.

Caldey Island is half old red sandstone (the lusciously vegetated SE), half limestone (the cave-pocked NW). We kayaked the 4km crossing from Tenby into Sandy Bay, passed between the islands (possible only at high tide) and travelled anti-clockwise, exploring the wonderful caves of St Margaret's Island last of all. Here's Star Cliff, with caves of its own: 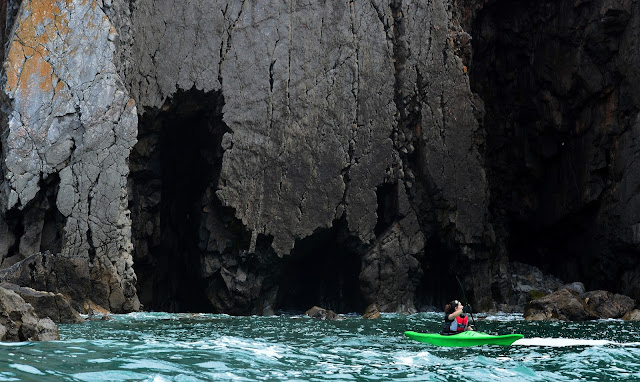 In the messiest sea - the heavy roll near West Beacon Point - a surprising number of faces: 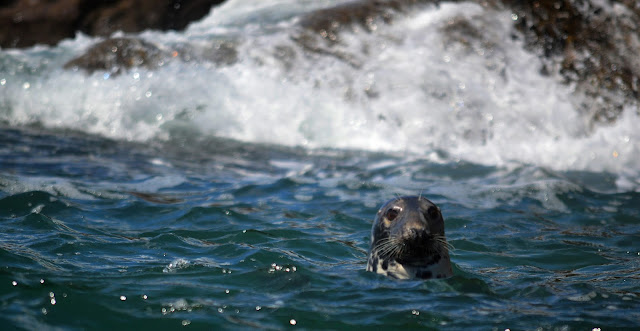 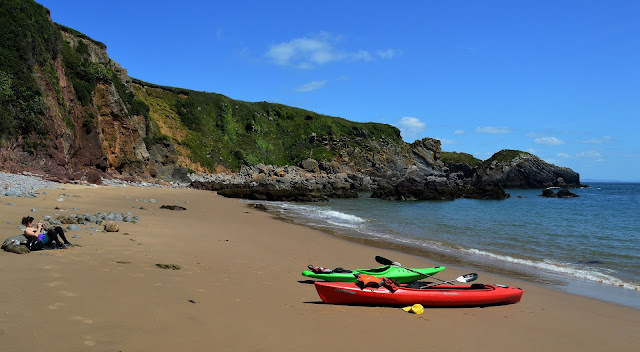 Priory Bay's shallow, red-sand beach provides ideal feeding for wave-chasers like this sanderling (always surprising to see them in summer since they only breed in arctic tundra): 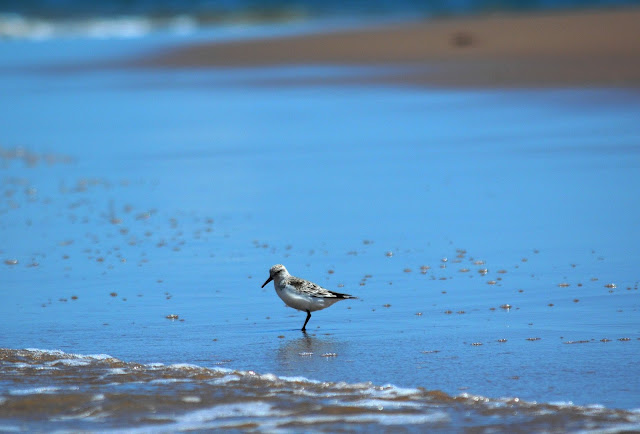 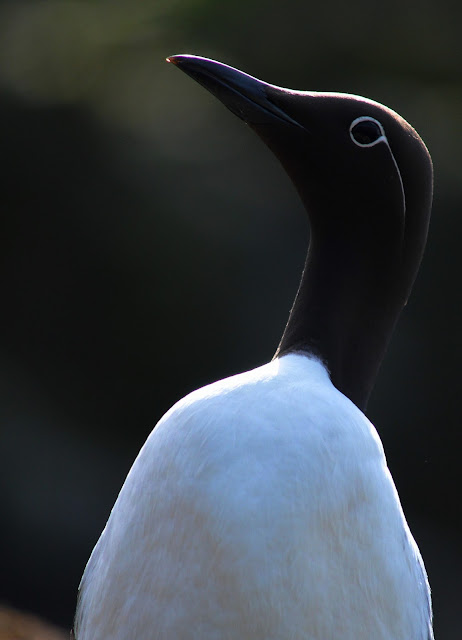 ...& Razorbill (many on these cliffs, but this one taken further up the coast): 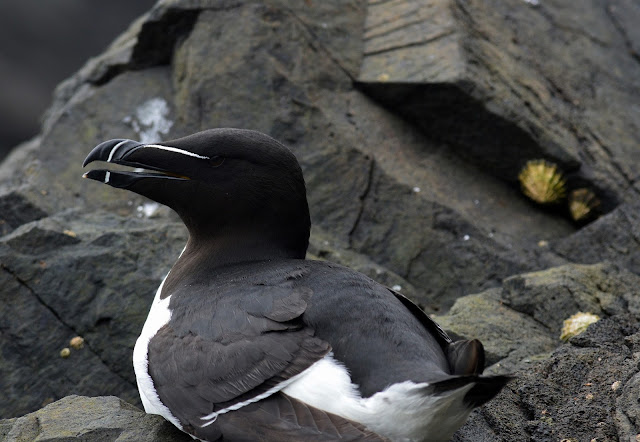 Sorry, but herring gulls are weird: 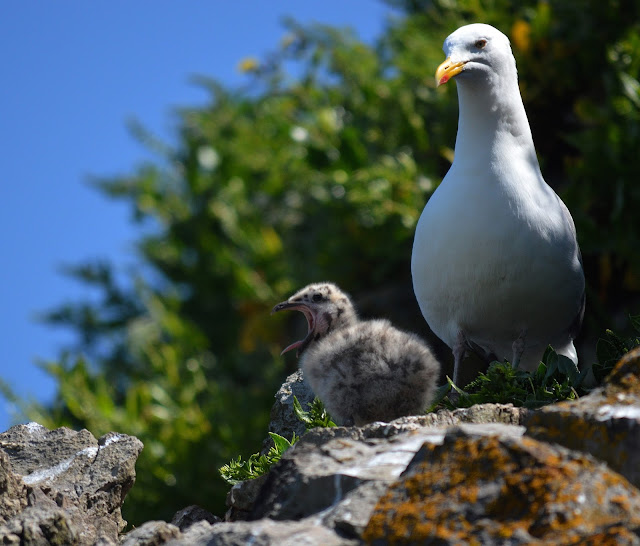 Back in (literally) the limestone, emerging from a cave that passes through the island; large guillemot/kittiwake colony ahead: 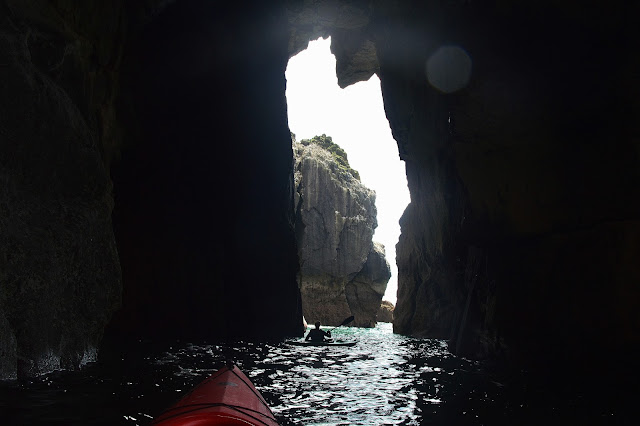 The cave is the size of a parish church.
You enter the vestibule like a pilgrim
and address the water as it gulps back
or sighs forward, swell by swell. 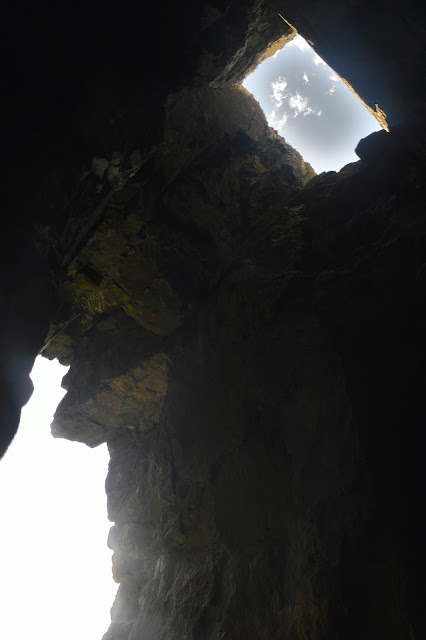 Next week I'll plant the sleeping bag on peaks in NW Scotland, with Rain_Later (curator of singular things) and a bookish rucksack holding a new Longbarrow collection, Skin by Chris Jones, as well, perhaps, as some Crichton Smith short stories. I'm hoping for the kind of weather that might permit crossings of treacherous Abhainn Srath Na Sealga to get in among the Fisherfield mountains: haven't been there since I bought a grown-up camera. Feels great to back on the mountaincoastriver at last...