This trip was beautiful - cold and mostly clear - which set me hankering after a real camera (within a month I'd given in and bought Nikon's entry-level DSLR). I should have got more done on these few days, but was absolutely exhausted from a hard couple of months work - so this was more of a wilderness unwind than a serious expedition. Just hanging around on these mountains was bliss. Beinn Dearg is a glorious, complex mountain tucked away behind the classic Torridon beasts - two of Scotland's finest - Liathach and Beinn Eighe. I've always preferred An Teallach to Liathach simply because the Liathach ridge runs too close to the Glen Torridon road (even if 1,000m above it) to feel truly isolated. So Beinn Dearg has the charm of being Torridon but with real isolation. It would surely be climbed much more often if you didn't have to get past Beinn Eighe and Liathach to reach it.

This was a deeply cold trip. The hoar frost on the rocks had formed enormous crystals and there was no running water at all (nevermind the tasking of preventing that in my bottle from freezing). When I arrived (after the usual 8-9hr drive) the weather was grim: thick cloud and rain. I took the path between Liathach and Beinn Eighe expecting to be spending a very wet night with little visibility. But by the time I was in sight of Beinn Dearg the sky had cleared completely, and the temperature consequently plummetted. You can see from the snow being blown off the peak how high the wind was at this point.

I camped on a shoulder of Beinn Dearg, not quite reaching the top before nightfall. 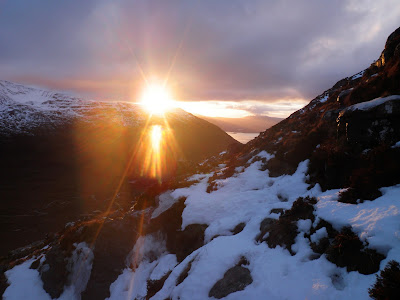 There was plenty of low cloud around in the morning, but this just made the views across to Liathach all the more dramatic. 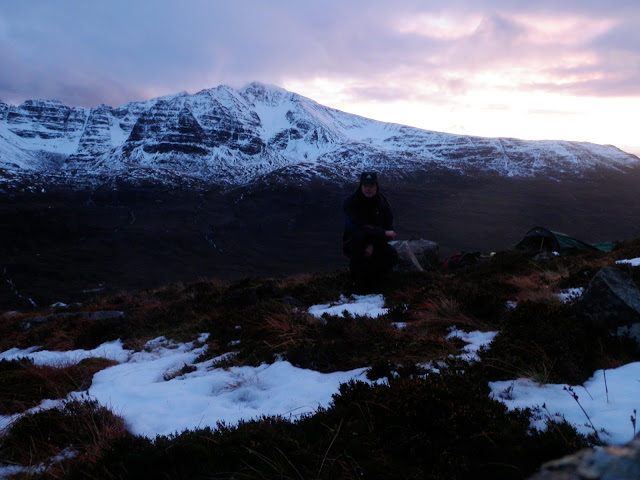 It was actually a wonderful place to camp: sheltered from the worst of the wind and with fine views 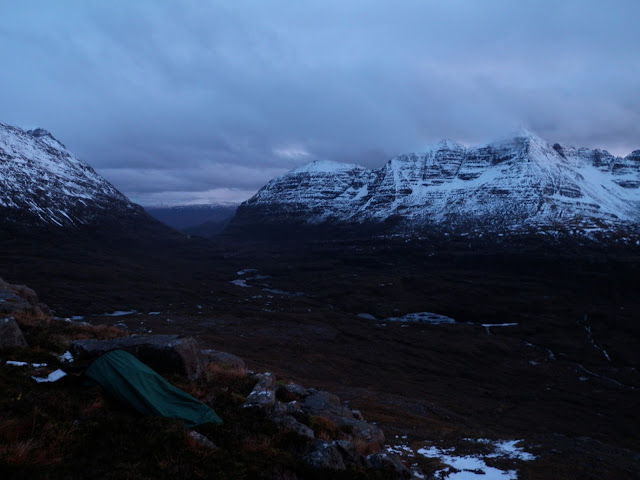 This side of 'the grey one' is considerably wilder than the road side. As if to prove the point, a golden eagle circled for a while between the two mountains just after dawn (if only I'd had the camera and lenses I bought a few weeks later). This was the last of a string of four trips on which I saw eagles every time - strange. A fork of geese (pink footed?) also passed with, as Robin Robertson would say, their slow squeak of rusty saws.

After Beinn Dearg I headed across to Beinn a Chearcaill past some nice Slioch views with lots of small, isolated chunks of white cloud passing.

The hoar frost that formed on all the lochans, and glistened in the sun, stood out against the relentless deep brown of the winter landscape. I'd like to see this region constructed as a dusted chocolate show-stopper on the Great British Bake Off. 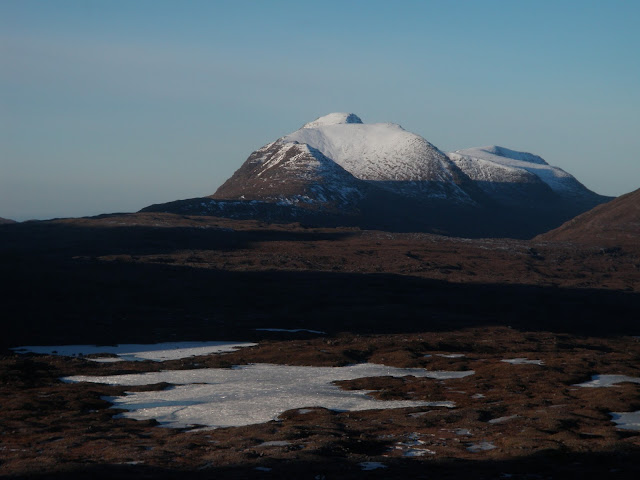 After Chearcaill, I spent the night at the bottom of Ruadh stac Mor (a ridge on the north side of Beinn Eighe). The triple buttress was looking superb and the lochan in the corrie exemplified the extreme chill of this couple of days. At least there was a patch of unfrozen water at this end of it - the first chance to get a drink since the previous day. 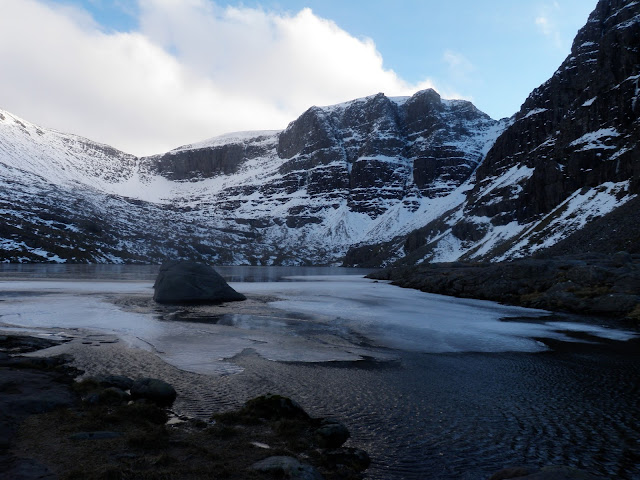 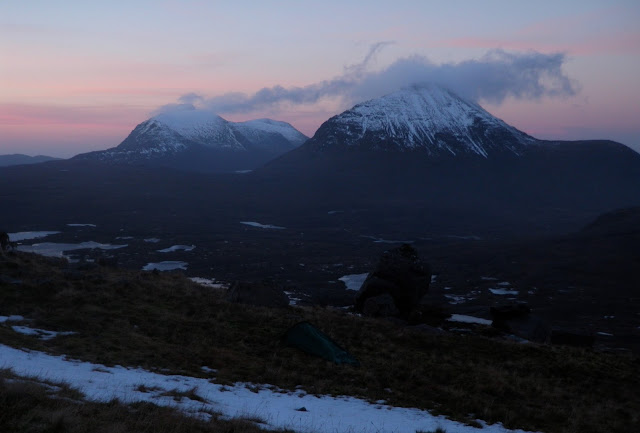 This night, with nowhere to escape the wind, was viciously cold. But the stars were phenomenally clear, with dozens of meteors and not a hint of haze: one of the very best nights I've ever spent in the bivi. I lay under the stars for hours before sleep, sometimes just gazing into space, sometimes immersed in Gary Snyder's The Practice of the Wild.

In the morning I headed up Ruadh Stac Mor. I was wearing my super-lightweight Katuhla KTS crampons which are wonderful little things - they fit any shoe, however flexible and never seem to come off (they're actually designed for snowy fell running). However, their ten spikes are half the length of normal crampon spikes and they're not intended for climbing. Since this trip I've been carrying real Grivel crampons, because the ascent of Ruadh Stac Mor was just too steep for the short KTS points to feel secure (no chance of front-pointing; flat footing all the way). When about two thirds of the way up and every step, particularly in this wind, seemed to threaten to send me plummeting down a vertiginous wall of snow and ice, I got quite unsure of whether I'd make it back down again. 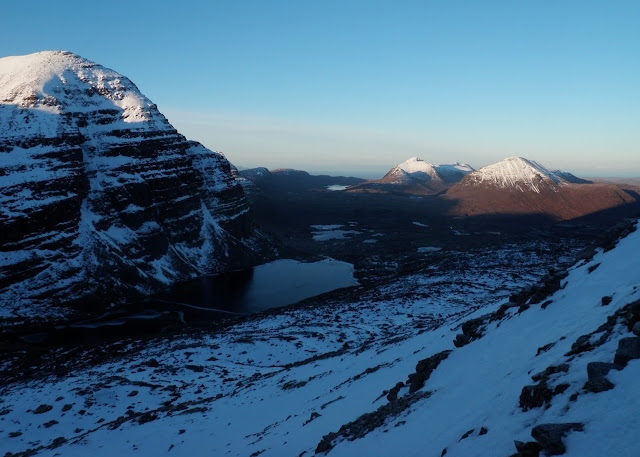 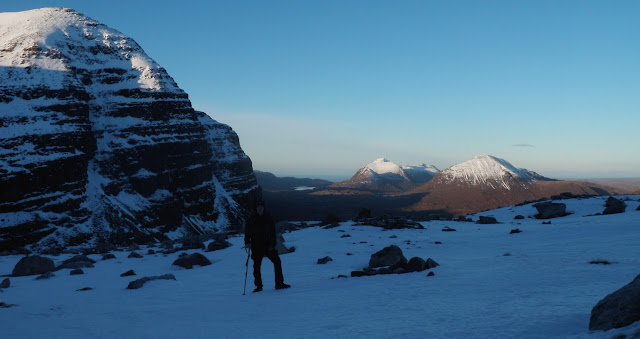 The views, however, were spectacular. I decided, given the conditions - particularly the fact that the sun was out and I really didn't fancy trying to get back down if the surface of the snow was softening - not to attempt the Beinn Eighe ridge today. I made it down without incident, before heading back round the mountain.

This trip might not look much from the pictures, and my mileage-per-day was the lowest ever, but it was actually among the most enjoyable. Pure atmosphere. Near-perfect conditions. And a feeling of total freedom after two months of particularly intense desk-bound work. Beinn Dearg in a December deep-freeze felt as close to true isolation as anywhere I've been on the UK mainland.
Posted by mountaincoastriver