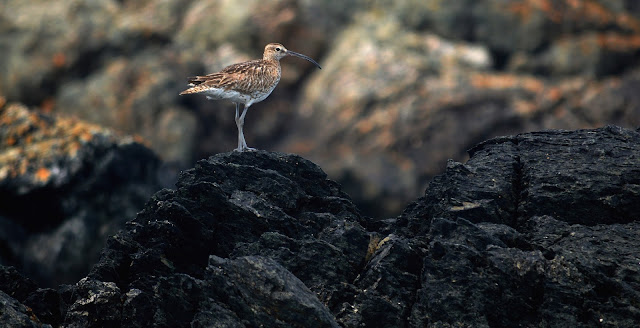 This trip comes with a health warning: it was undoubtedly irresponsible to take it on. Bardsey Island is a kind of Mecca of Celtic Christianity, a burial ground for countless Saints. It's also now a Mecca for British kayakers although a burial ground for countless older boats. Only a few miles from the mainland of the Llyn Peninsula it's wrapped around by some of the cruellest and most complex tidal currents in Britain. Some might say that to attempt this in an inflatable kayak with no real skills is a recipe for disaster, and they'd be right: there were several points on this trip when we were almost carried out to sea, surrounded by a swell that occasionally towered over us and frequently dragged us in unpredictable directions (even on what was a carefully chosen, very flat day overall).
We did manage to keep control, however, and this stunning island, with its diverse fauna and spectacular views was well worth the risk. We set off early from a cove near Aberdaron, having carefully timed the trip to make sure - as far as is possible - that our circumnavigation would always be helped rather than hindered by the tides. (We just had to hope our guesses at how long each leg of the trip would take were accurate.)
(I should note that there are a few factors that make this trip slightly less mad than it sounds: Llinos grew up near here and knows these seas well, including through her time sailing in the Welsh national squad. We'd both been out on this water in the boat of a local fisherman. I did painstaking research into what we could expect at each stage of the journey, and put some work into making sure my strength was at its best for the trip too - we didn't take so ridiculous a venture lightly - nor should anyone else).
These pictures look back across the sound, showing the head of the Llyn peninsula and the complexity of the currents, along with a few puffins in the foreground (the island on the right is one of the Gwylans). 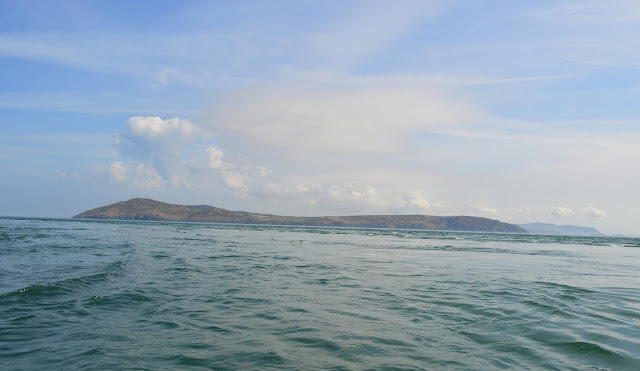 There's some great literature about Bardsey. Brenda Chamberlain's poetic journal Tide Race is a wonderful evocation of life and environment here, while Christine Evans' poetry is also well worth a read, particularly Island of Dark Horses: she's a poet who easily bears comparison with the better-known bard of the western seaboard, Gillian Clarke. Robert Macfarlane begins Wild Places with a trip to Bardsey; Macfarlane, however, had spent no longer here than I have. Predictably enough, despite Macfarlane's current vogue, the literature by people like Chamberlain and Evans - who have spent year after year braving the island's elements - is far, far richer and more interesting.

The north east end of the island was the best for wildlife. There were black guillemots, whimbrel and turnstones as well as lots of seals. Bardsey is very unusual in having whimbrel that both winter and breed - they do so in Shetland, but not many other places in the UK. They're subtly different from curlews in the shape of their beaks and in the pale eye stripe seen below. Here's an entry from the Bardsey Lighthouse Journal with a brief explanation. 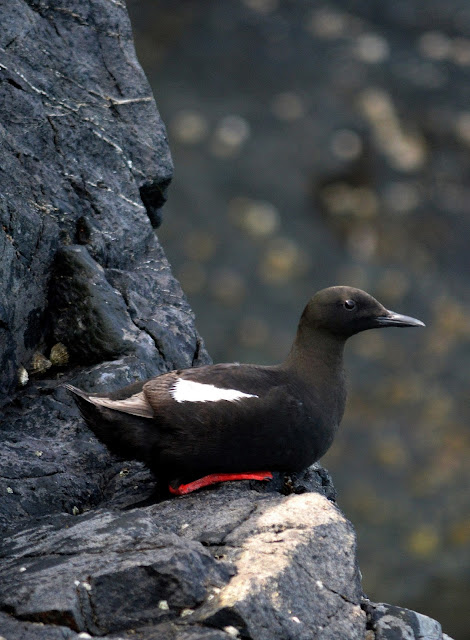 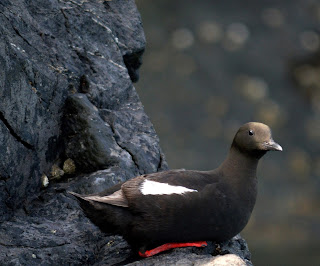 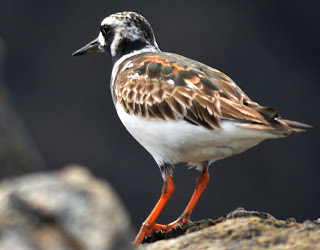 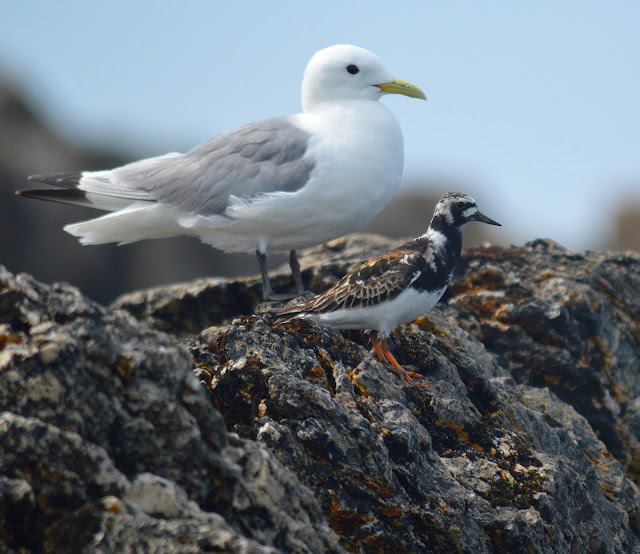 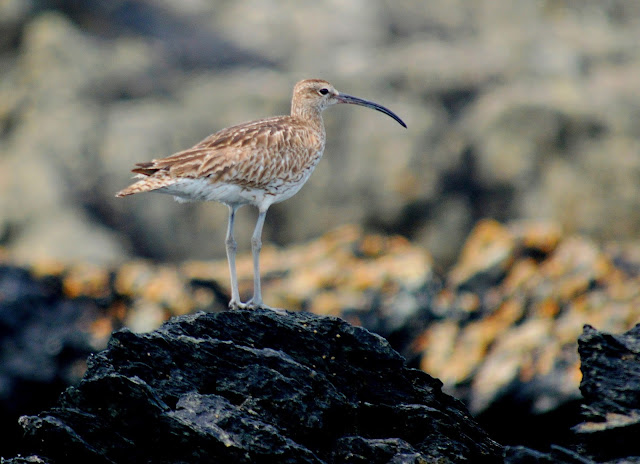 We then headed down the north side of the island, making a brief stop at the beach by the island's flat middle, where a family of shellducks with small chicks were feeding. As we approached the chicks dived, so we only got a photo of an adult before moving swiftly on: 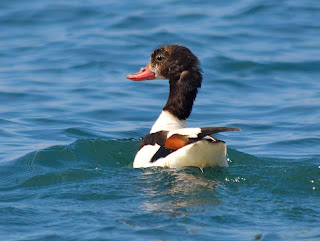 Setting out again, we paddled past the lighthouse. 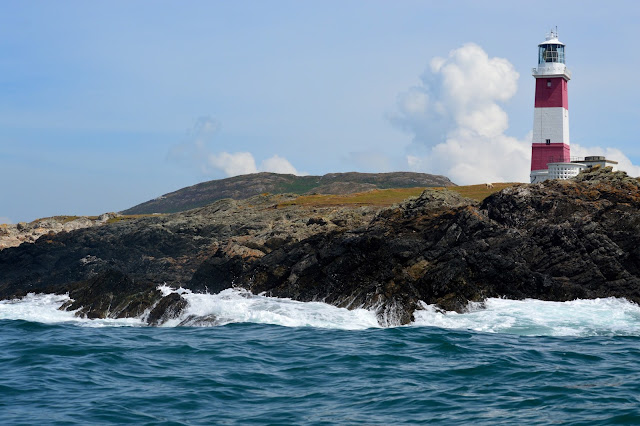 The nearer we got to the far corner of the island the bigger the swell became, until we hit a tidal seam where the sea was really quite violent. At one point in this swell, paddling forward, I looked away from the shore for just a couple of seconds before glancing back and finding that we hadn't moved forward at all, but had drifted a huge distance from the shore. Several of the waves, towering over us, were breaking: if one of these had caught us we might well have been overturned. Fortunately, we made it through and headed round the west coast, coming into the sheltered bay on the other side where several seals were soaking up some sun in dead calm waters. 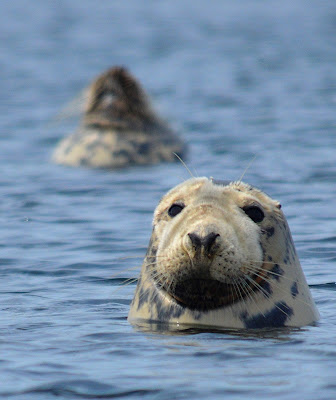 After a little sun ourselves, we headed back to the mainland - the crossing itself was nothing compared to that tidal seam at the west end of the island. This was a superb trip that tested us and our tiny vessel to the limits; like so many risks, it was well worth taking.

Bardsey is a spectacular island, but the fact that the Trust and those who work there look so negatively on people unobtrusively and harmlessly spending the night on its coastline is a throwback to more authoritarian times. I can understand why they consider the policy necessary, but to me it seems out of keeping with Bardsey's history, myth and meanings. The number of people who make it out here is small and self-selecting and it's highly unlikely that any would operate anything other than a leave-no-trace philosophy. That said, the Bardsey authorities do a good line in social life blogging and a truly spectacular line in wildlife blogs.
Posted by mountaincoastriver