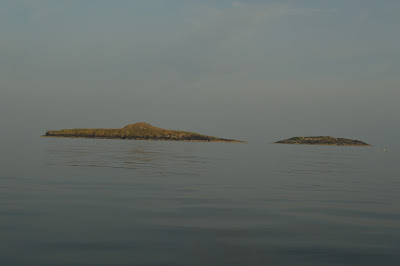 This summer we took the boat out to sea as many times as we possibly could, testing its limits and ours on some of the longer trips. At the end of the summer, having assured ourselves that this kayaking business had legs, we bought a real kayak to extend those limits a bit. We'd certainly recommend these remarkably inexpensive Z-Pro inflatables though - ours was just borrowed, but we travelled reasonably long distances at sea in a variety of conditions and it always served us well.

The Gwylan (meaning Seagull) Islands, close to Aberdaron, were a kayaking revelation: like a tiny Welsh Handa Island, but without other visitors. It takes less than an hour to paddle out, leaving lots of time to explore.
The starting point is the picturesque village of Aberdaron, which was home to one of my favourite poets, R.S. Thomas (a true successor to Basil Bunting and David Jones as Britain's regional poetic grump). Parking in the National Trust car park it's only a couple of hundred yards to the sea.
On the way out from Aberdaron there were the usual attractive sandwich terns on buoys and a local fisherman was picking up lobsterpots with Welsh pop music, still stuck in 1970, blaring. 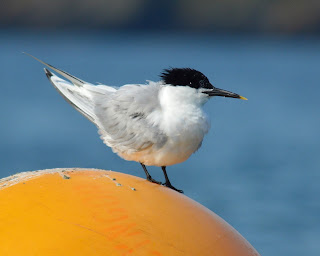 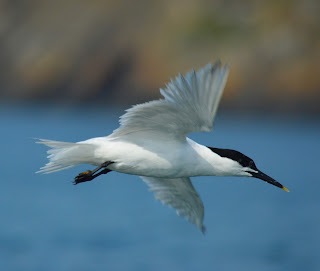 Beneath the surface were a very attractive array of jelly fish, featuring most of the best-known breeds that populate British waters (the swim to the islands would be quite appealing if not for them). The odd gannet patrolled the sound between the coast and the islands but at this point there wasn't much birdlife. Looking back to Aberdaron: 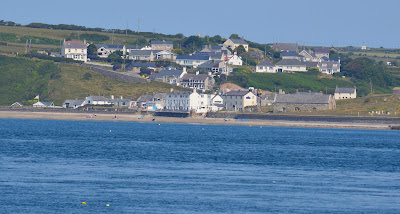 We still didn't really know what to expect. We'd heard there might be puffins, but had no real info beyond that. Before long we could see the odd tiny dot in the sky around the island, showing that there were birds there, but until we arrived we weren't prepared for the huge number. By the time we were nearing the islands we were surrounded by puffins, razorbills, fulmars, guillemots, black backs and shags both on the sea and whizzing by in the air.

The islands themselves were, end to end, riddled with nests, meaning that the only place to get out of the boat without causing distress to birds was on the long trailing edge on the north side of the larger island which is completely submerged at high tide so unsuitable for nesting. We stood here for some time watching razorbills and puffins zoom by, often with beaks full of sand eels. 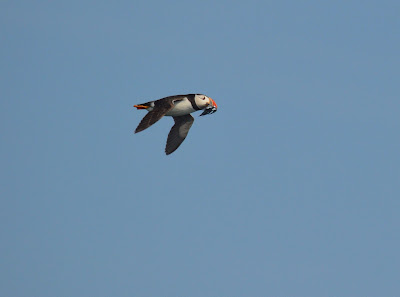 We found out later that there are (at last count) over 700 pairs of puffins on these tiny islands. We then travelled round and round the islands, in figures of eights and full circles... 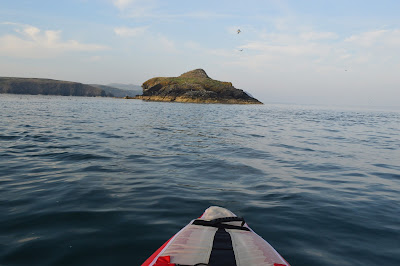 ...looking through their natural arches, playing with the tidal flow between them, and finding that different parts of the islands were colonised by different birds. 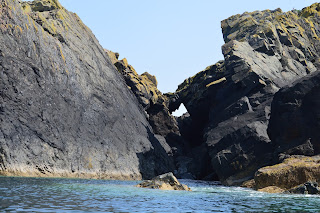 The puffins on rocky outcrops were remarkably curious, moving closer to the kayak rather than away from it as we approached. 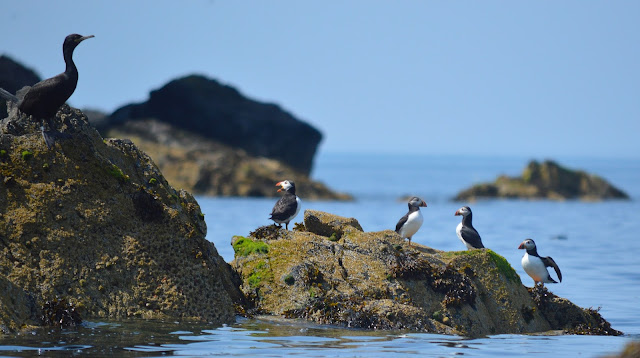 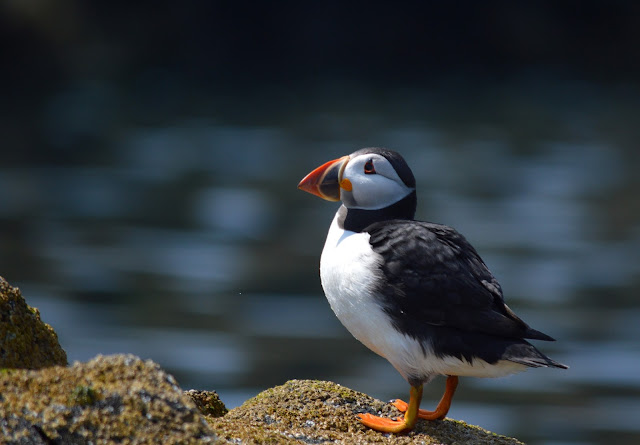 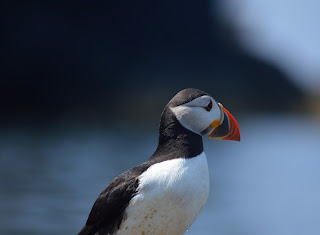 This picture, where the scale of the puffin can be seen relative to seaweed, is a reminder of just how tiny they are: 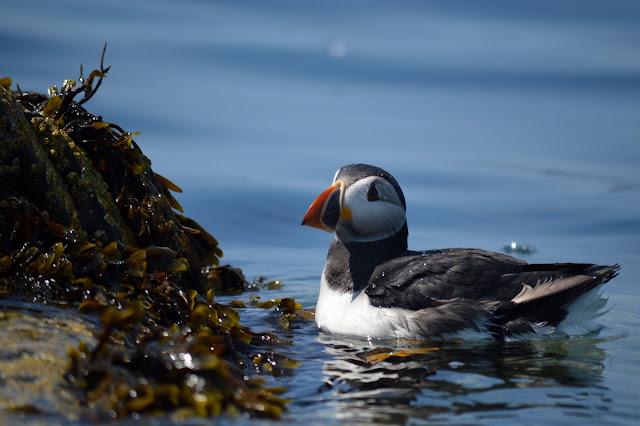 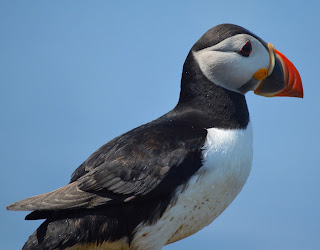 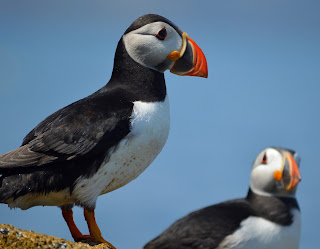 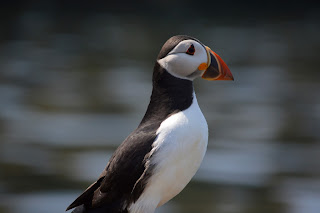 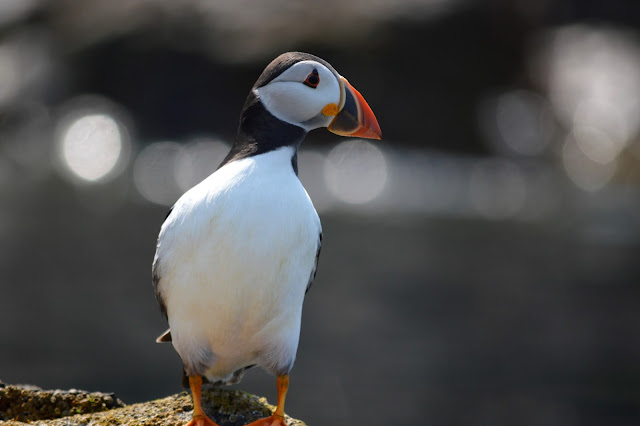 Seals patrol the complex coastlines of the islands but these ones were not so friendly as the Tanera Mor & Oldany colonies, never taking an interest in the kayak (even when we ate our mid-morning salmon). From here it was also possible to see the fabled Bardsey (through the clouds of birds):

It didn't look too ambitious a paddle and we resolved to get there before the summer was through...
The puffins on the water seemed just as unperturbed by the boat as the ones on the rocks.
When we were drifting rather than paddling they were quite happy to swim right by. In fact, it was sometimes difficult to make sure they weren't bumped on the head by paddles. 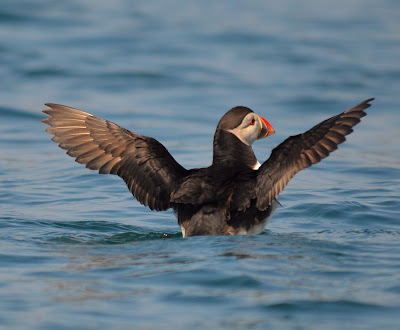 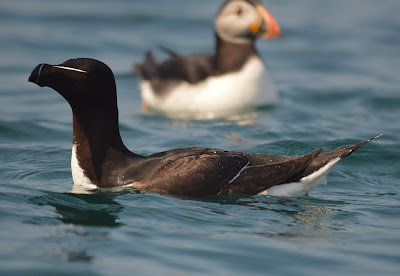 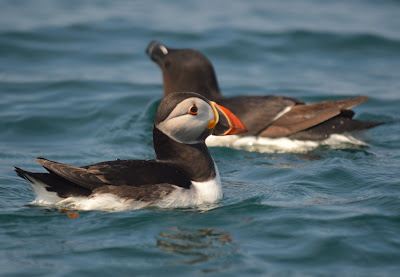 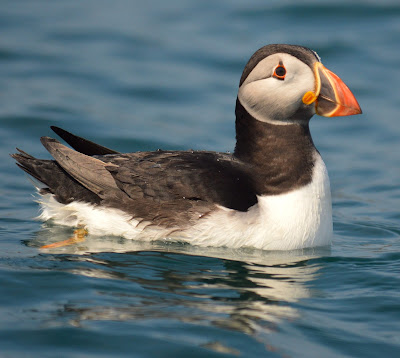 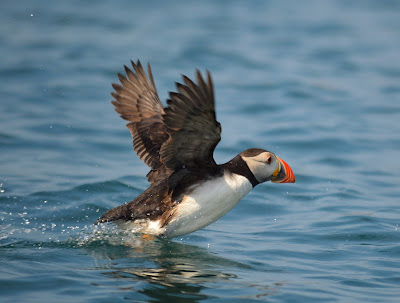 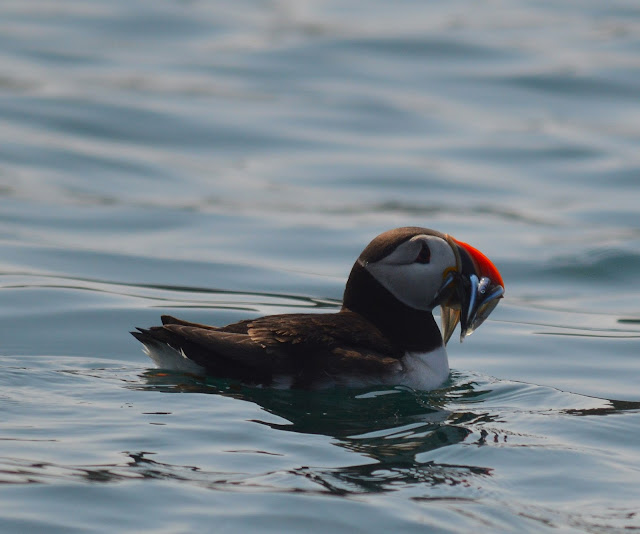 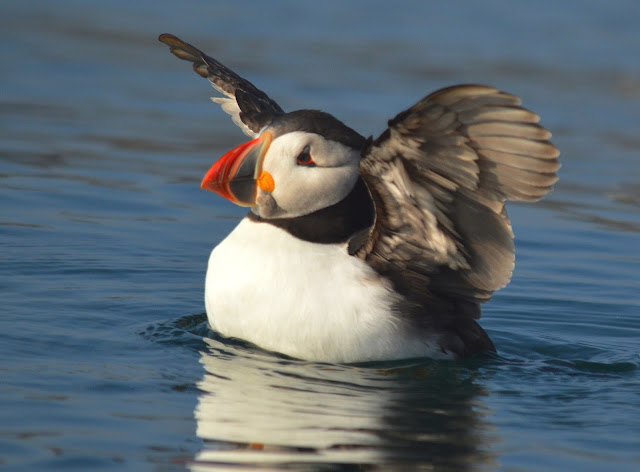 After spending most of the morning at the islands we set off...

...paddling against the tide to Porth Ysgo on the mainland to meet the mother-in-law on the beach for lunch. She had her first go in the kayak and was apparently far more accomplished than the father-in-law a few days later.
We spent the early afternoon snorkelling around Porth Ysgo's rock formations where there were lots of colourful fish and some very large, very impressive, spider crabs (a feast of a creature that, like so much great seafood, has simply not caught on in Britain).
On the way back along the coast we ventured into a deep cave. Very strange and eerie noises were coming from the recesses of this - grunting and wailing - it turned out to be full of seals, who were soon swimming around under the boat while others still on the rocks continued to make ghostly sounds. Quite extraordinary.
A couple of days later I headed back to the islands on my own in the evening. This was a great time of day because the puffin chicks were venturing out of their burrows, while the adults were whizzing back and forth across the tops of the islands. They fly much faster than you might expect (far quicker, for instance, than razorbills) so it takes quite some patience to capture them in flight. 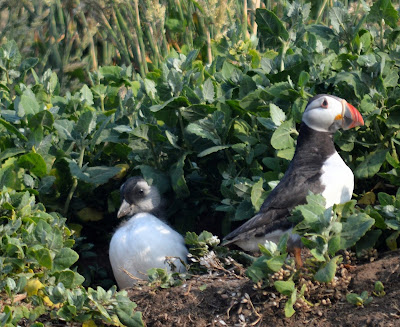 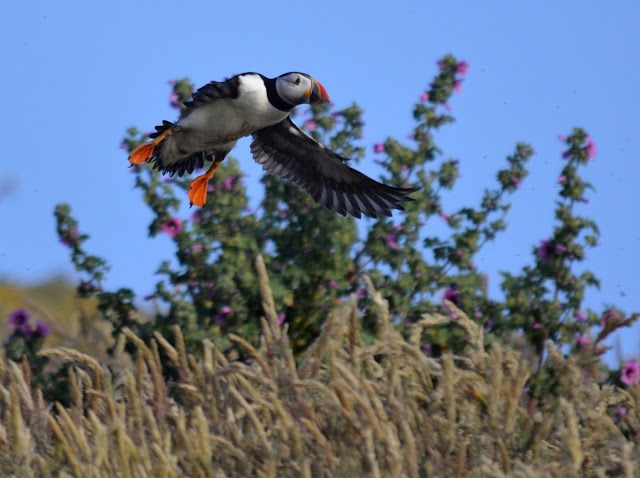 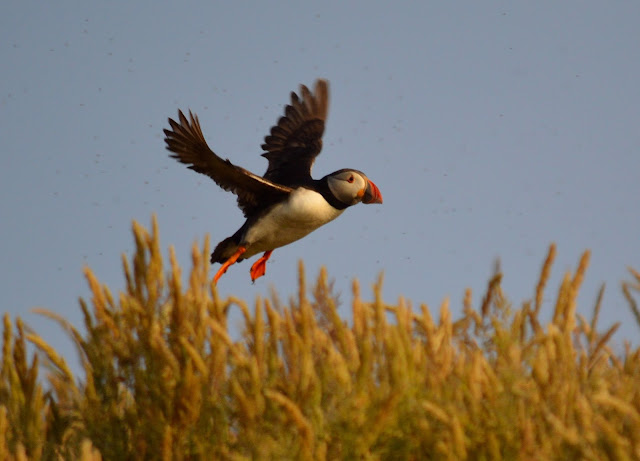 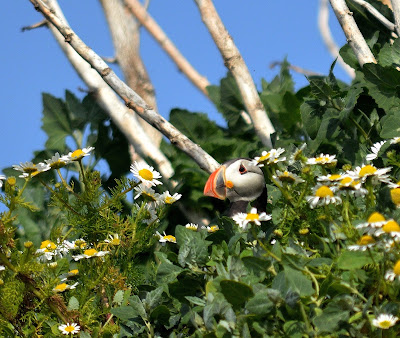 I arrived back in Aberdaron just as it got dark and headed for fish and chips (or rather crab and chips) at a wonderful little shop, a chippy that's far more than a chippy, in the village. Then the drive back to bham...
Posted by mountaincoastriver