These couple of nights on Hoy were part of a trip to stay with some friends of a friend who had booked a house in Stromness, where they used to live. That friend and I disappeared for a while, him to join me for a night at the top of St John's Head (the highest cliff in Britain) and me to spend the next night on Ward Hill (from which every island in Orkney can be seen).
We made leisurely progress in fine weather from the North to South of Hoy as a group of 5. We then spent an hour or two at Rackwick. This is a beautiful spot where one of my favourite composers, Peter Maxwell Davies, lived for a long time. Some parts of his symphonies (of which the fifth would be one of my desert island discs) are constructed from patterns of waves and other aspects of the sea's behaviour observed here. Lounging on the beach at Rackwick we watched one of the most spectacular performances I've ever seen: arctic terns pursued by arctic skuas (elegant, acrobatic birds who survive by piracy - chasing other elegant, acrobatic birds until they regurgitate their meals which the skuas then eat). Skua and tern each try to outwit each other by flying elaborate patterns full of about turns, nosedives and zigzags. If the great skua (of which there were plenty about too) is a thug, the arctic skua is a ninja. A reminder that barbaric can be beautiful.
We then climbed the cliffs towards the old man of Hoy, sat on the edge accompanied by fulmars and puffins before edging along the cliff and drank 25 yr old Talisker. (We'd finished off our 30 yr old Highland Park the night before). 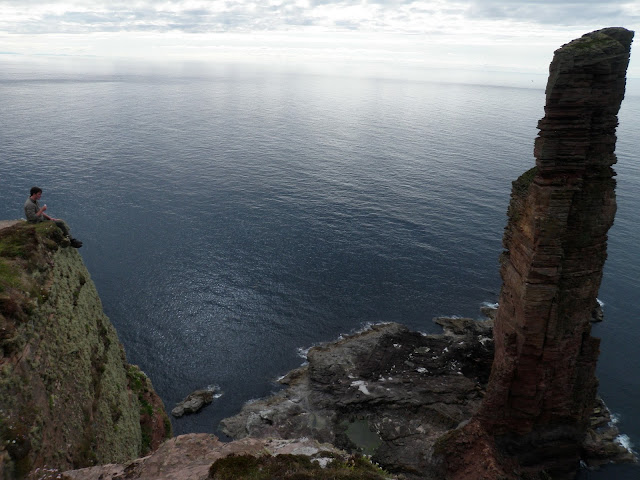 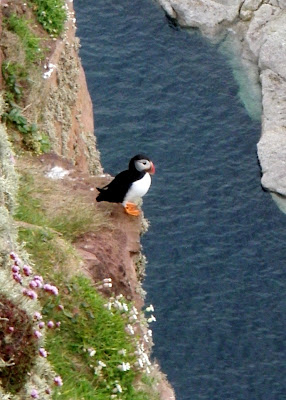 There were some wonderful airy seats for reading the Orkneyinga Saga as the afternoon progressed, and some some beautiful rock formations along the way. 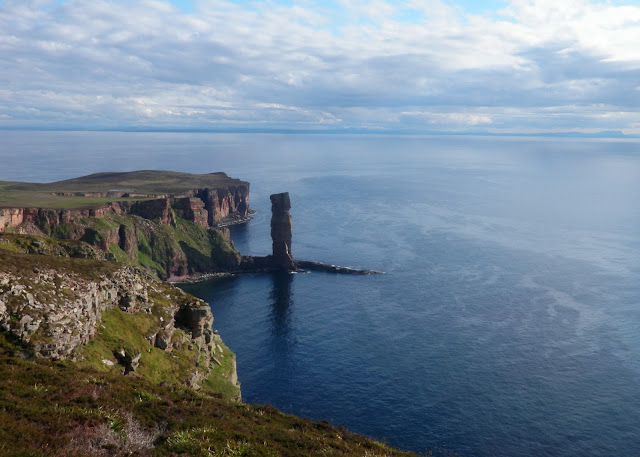 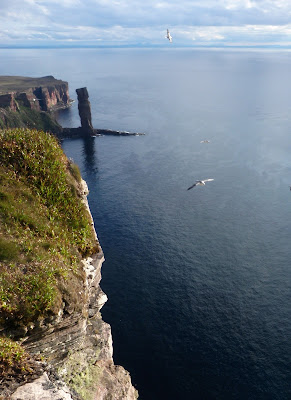 Several slate grey hen harriers, patrolling the moorland, came pretty close.
We then found a wonderful spot to put our bivi bags down. A foot or so from a thousand foot drop on one side, and from a five hundred foot drop on the other. 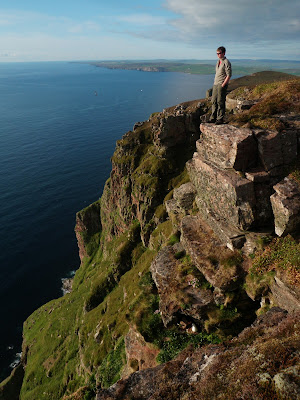 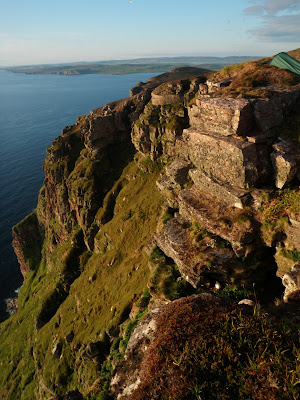 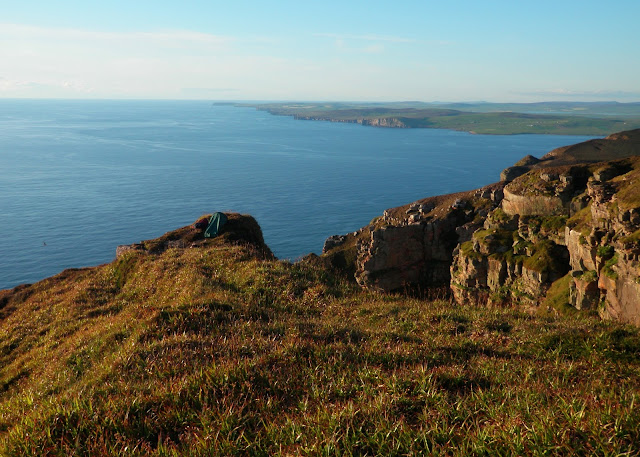 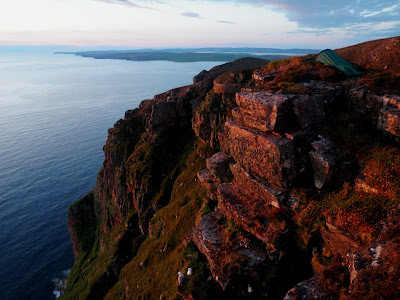 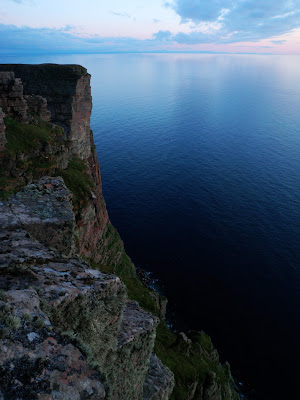 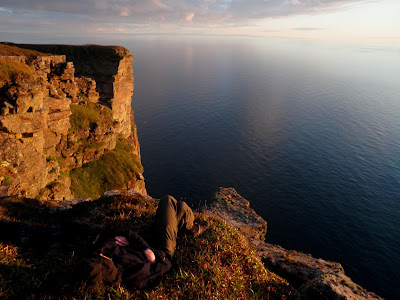 As the sun began to go down we watched a basking shark lazily progress along the coastline and several minke whales break the surface a little further out. I don't usually carry binoculars, but they were welcome on this trip.
When we put the bags down on the clifftop it was noisy: we were surrounded by fulmar nests. It came as a great surprise that the fulmars were absolutely silent during the night. The mixture of moss and grass that we were camped on was as comfortable as could be, and this was a beautiful night, with view straight out of the bag over Yesnaby point, and only an hour or two with the sun below the horizon. 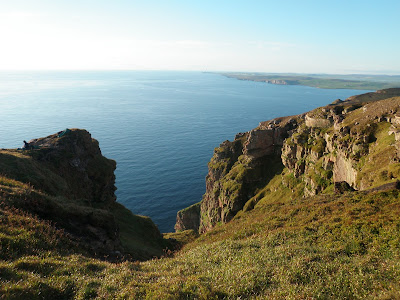 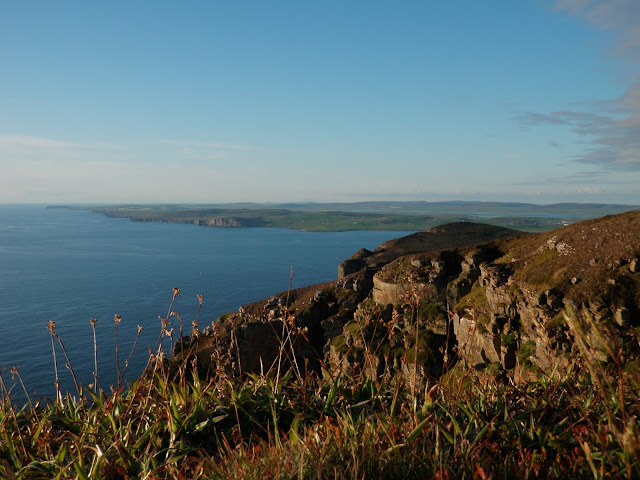 Next morning we passed lots of broken fulmar eggs and fulmar carcases (great skua and/or hen harrier doing?) as we made our way further along the Hoy coast before the descent to the ferry to see Ben off back to his friends. I then took a vertiginous scramble up a gully on the side of Ward Hill, several times wondering why I hadn't gone a proper way. The top was full of great skuas who don't take kindly to visitors - I was dive bombed again and again during the day. But I found a relatively bonxie free spot on the north side of the hill, looking out over the whole of Orkney and enjoyed the view. 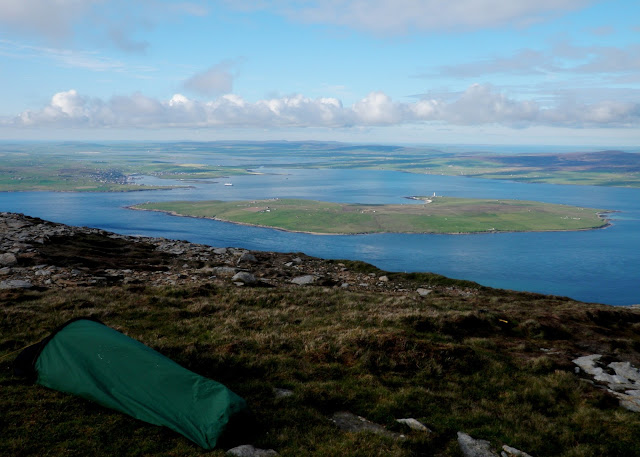 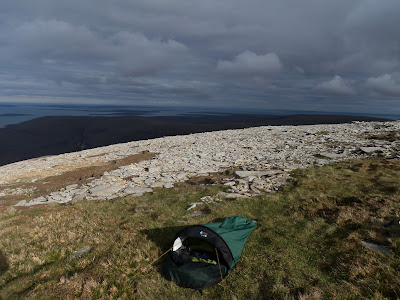 Here are the lights of Stromness during 'simmerdim' the point where the sun is below the horizon and it's as dark as it's going to get.

Next morning I had to be up early for catching the ferry back to Orkney mainland and then another ferry back to the mainlaind mainland before a long drive back to Birmingham (which, because the car broke down near Carlisle, turned out to be far longer than expected). To make sure I caught the early ferry I took a steep route down and across a marshy valley that unfortunately turned out to be the main nesting zone for the skuas - progress was considerably slowed by their constant attacks but it seems I managed to avoid their nests by enough distance for them never to make any serious efforts to do damage. In the end I was in plenty of time, and finished off the Orkneyinga Saga by the jetty.
Posted by mountaincoastriver