This felt like a real adventure. It was my first trip to Scotland with the bivi bag, and I wanted to test the extent to which this meant I could just sleep anywhere - especially on the big peaks. The days by early April are nice and long, so I knew it would be possible to do the long drive from home, then the walk into Slioch from Incheril. I hadn't expected it to be possible to begin the actual ascent...

...and to be on the peak of Slioch by sunset - so this was a real bonus. I left the bivi bag by the lochan on the last shoulder before the top, rather than being really brave and setting up on the peak proper. 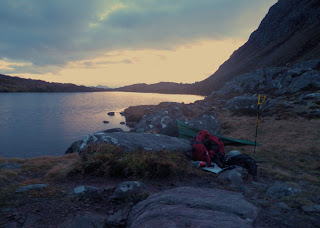 This was a beautiful, still evening, with some of the best views I'd ever seen. 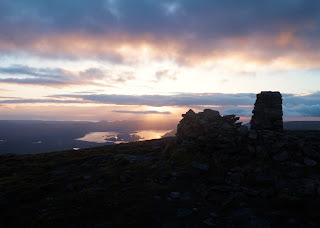 The bivi provided a wonderful quiet night's sleep until shortly before dawn when things got quite noisy. The dawn arrived with a roaring gale - viciously cold and brutally unrelenting. I don't think I had ever been so cold in my life, and I was very, very glad I hadn't camped on the peak itself. It was on this night that I learned how true the old phrase 'The still of the evening, the roar of the dawn' actually is, and that however idyllic a sunset is, it's difficult to guess what conditions you'll wake up to. The dawn was, however, bleak and beautiful.

As I headed down towards Fisherfield and 'the great wilderness' the wind did begin to relent a little and I was reminded that it was indeed April not January by the primroses springing up amongst the heather. Heading round Lochan Fada...

...I decided to head for Beinn Tarsuinn and Coire Mhic Fhearchair. Although the wind remained high (and cold) it was turning into a beautiful day. There were some great views on the way up; as usual many of the Corbetts looked more dramatic than their bigger neighbours.

But I headed up the substantial Munro Mhic Fhearchair first: 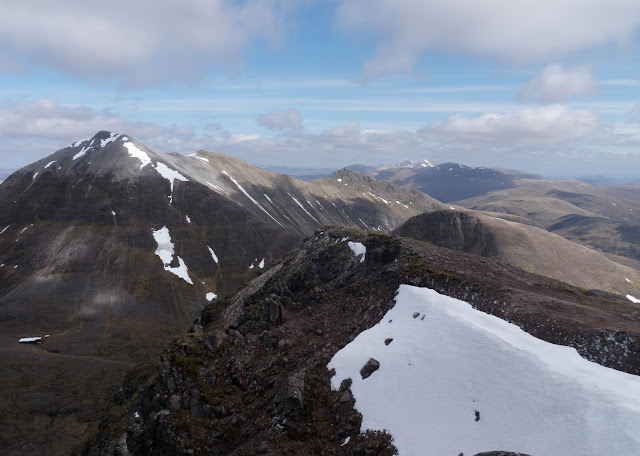 There were substantial numbers of Ptarmigan around on the approach. After this slog of a climb I went back down the way I'd come and crossed to Beinn Tarsuinn.

I was so taken with this spot and its weird and wonderful ridge...

...that I decided I'd spend the night here, even though it was still only mid afternoon. I was adamant that - whatever the risk from a roaring dawn - I would spend my first night on a peak and Beinn Tarsuinn was the one I wanted it to be.

One thing that made it so appealing was the little flocks of snowbuntings on the top. They were doing exactly the apparently-directionless, group movements that makes the nickname 'snowflakes' so appropriate for them. I sat and ate smoked oysters, drinking Talisker and reading Sumerian mythology on the peak then headed along the ridge...

...leaving my equipment behind on Tarsuinn. I had it in my head that I might be able to climb one of the strangely shaped peaks on the other side, but by the time I'd reached the valley floor, the weather seemed much more uncertain. So after a brief stroll along this stupendous glen I headed back up Tarsuinn for the night.

By the time I'd reached my equipment a big bank of cloud was rolling in from the Northwest: that was the last I saw of these spectacular views. Navigating down through the thick fog in the morning was something of a challenge in this pathless region, but by the time I reached the edge of Lochan Fada I was below the cloud, ready for a gentle stroll back to Incheril.
The weather was, however, grim. I decided that mountains were now out of the question so headed to Ullapool for the Stornaway ferry. This would be touch and go - could I reach somewhere wild on Lewis to camp before nightfall? I caught the last bus north from the Stornaway ferry terminal (it was already pretty dark) and got off at the most northerly point I could. By now it was completely dark and this was an area I didn't know at all. I walked a few hundred yards before putting the bivi bag down in a field, just out of sight of the most northerly houses, aware that this was probably a spot too close to people (and possibly on private land) to feel really comfortable. This was a strange night. Within a few minutes of settling, some very weird noises began, very nearby and it took me some time to catch on that I was listening to the voices of shearwater chicks and the whir of their parents wings as they travelled back and forth feeding their young. I'd inadvertently camped in the midst of hundreds and hundreds of shearwater burrows. Fortunately I hadn't camped on top of any and didn't seem to be causing any inconvenience to the birds, but this was one of the oddest nights I've ever spent in the bag.
I packed up before dawn and headed north along the coast.

The day was very grey indeed, and for most of the time drizzly. There would have been fantastic views of the mainlaind mountains across the minch if anything more than a couple of hundred yards away had been visible. By lunchtime there was slightly more visibility - enough to see Sea Eagles in the middle distance, but not enough to see distant landscapes. So this was a nature day, and in those terms it was superb. The landscape of Northern Lewis is inhospitable in the extreme. It is waterlogged to an extraordinary degree - just one vast marsh - but never with the kind of running water that seems appealing to drink. This marsh, next to some stunning sea cliffs, is a great environment for birds. I sat and watched a black throated diver on a small lochan for quite some time, before having lunch on the cliffs where kittiwakes and fulmars were responding to the periodic passes of a sea eagle. When I sat down a pair of oyster catches began voicing their disapproval very loudly, and it took me a couple of minutes to realise why: I'd accidentally sat right next to their eggs. 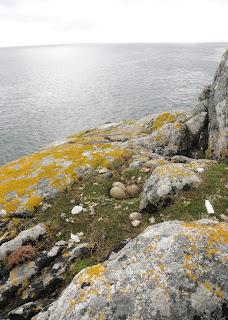 I moved on quickly. After reaching the island's most northerly point I headed back the way I'd come to spend the night on a small grassy isthmus from the cliffs. The weather had come in again, grey and damp, but this was still a beautiful night because there was so much sea life. A pod of porpoises with two very small calves passed by several times, just a few metres below the bivi bag and only rarely did the rain get strong enough to justify closing the bivi bag.
Next morning, the clouds were higher (about 900m) so I headed towards the ferry. The bus back to Stornaway was a lovely experience. It was the local schoolbus, and all the primary school children on board were speaking in Gaelic. Only at one point did one of them break into English. I'd noticed that some of the children were getting increasingly annoyed with each other, seemingly in an intense argument over something very important. Suddenly, the argument boiled over: one of them lost his temper completely, stood up with fists clenched and shouted in English at another, 'There's no such thing as an Elephant bird'. An important issue indeed.
The ferry crossing was beautiful, with the Assynt mountains now standing out nicely against a brighter sky.

I decided that tonight would be spent on top of Suilven, but given the long walk in to that mountain this meant getting a move on. I drove to Lochinver (my first time there, with little inkling of how many times I'd be back over the next couple of years) and set off for Suilven.

The approach involves plenty of bog dodging which did slow things down a little, but I was on the sharp ascent by the time the sun began to set.

The views from the top were extraordinary in the light of a very colourful sunset. 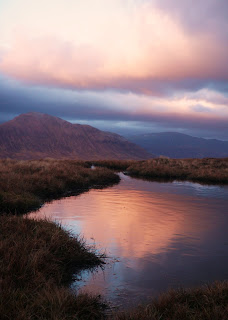 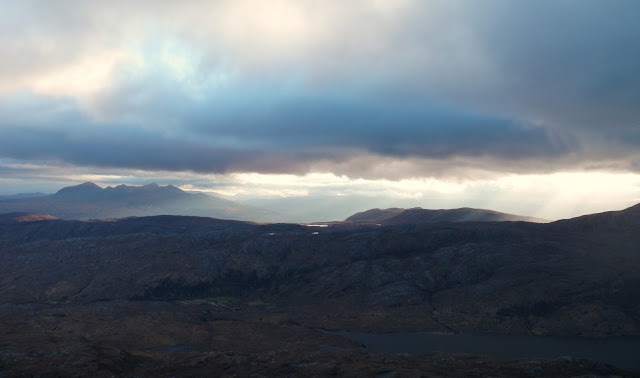 This is one of those evenings I wish I'd had after I bought a good camera that could register colours properly. It was a quiet night except for some strange rasping bellowing from the bottom of the mountain - whether this was a deer or a fox I don't know, but it was quite eerie. In the morning I wandered to the other end of the mountain before heading down and embarking on the long drive south.

I would have loved to stay a night or two longer now the weather was good, but that most awkward of inconveniences - a social life - got in the way. I had commitments at home that I couldn't get out of without causing offence...
Posted by mountaincoastriver