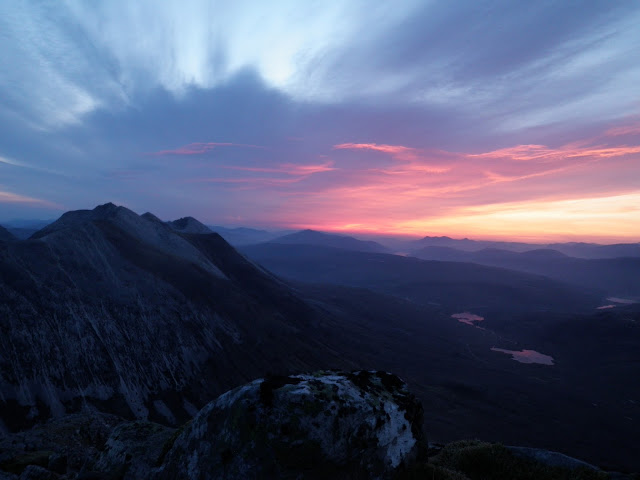 My first attempt to do the Liathach ridge had been one of the most unsuccessful trips I've had. I'd got onto the ridge just in time to catch a view down the glen behind. I got one photo: 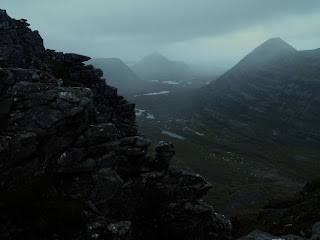 Then the clouds had come in and I'd seen nothing else. I made camp on the ridge nonetheless, hoping for clear skies in the morning, but the night had brought storms and, camped right on the lip of a thousand foot drop I had feared for my life and my belongings.

This time round I parked up with blue, but hazy, skies...

... and camped in the same place, but with great views in all directions and no wind. 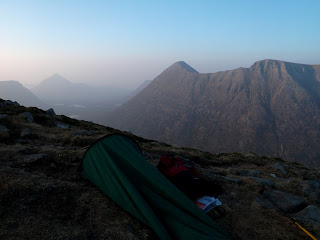 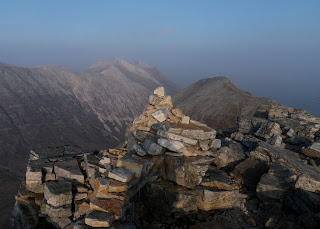 The ascent of Liatchach is very steep - a great workout - but is over surprisingly quickly. There's no real walk in, so with a little exertion you can be on the ridge very fast. I'd just driven up from Birmingham, so this was perfect. I put my equipment down just a hundred yards or so to the West of the point at which the path broaches the ridge, then headed up a couple of peaks to the West to watch the sun set over Beinn Alligin - this was just superb. 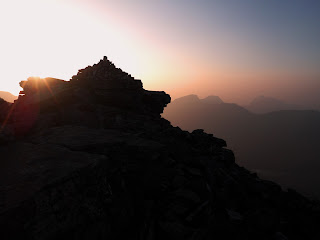 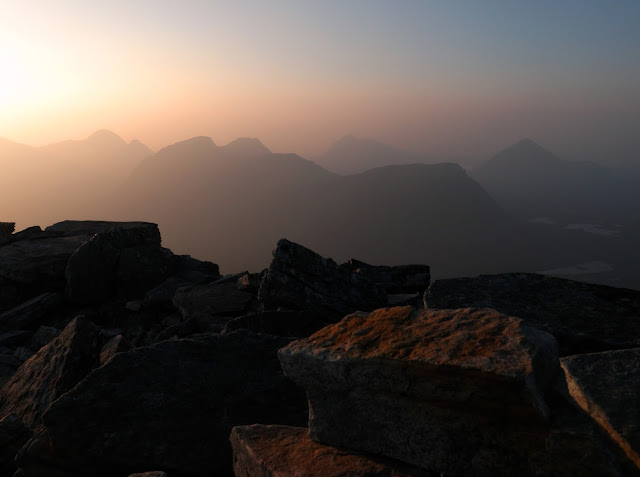 As the light faded I read RS Thomas's The Echoes Return Slow with a little Ardbeg Corryvrekan before settling down for the night. The night was beautifully calm this time round. Before dawn I headed up the Eastern peak of the mountain, to watch the sun come up over Beinn Eighe. This was one of the finest dawns I've ever seen, and a great spot to see it from. 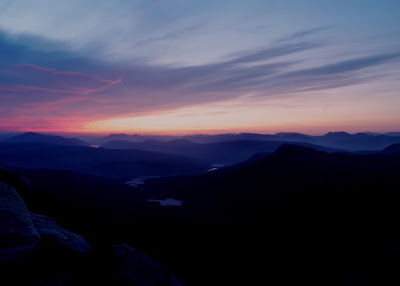 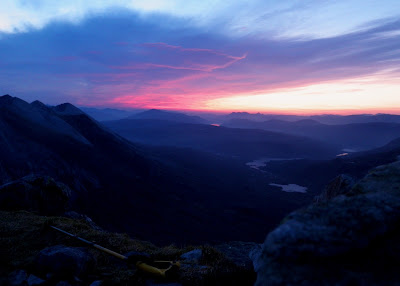 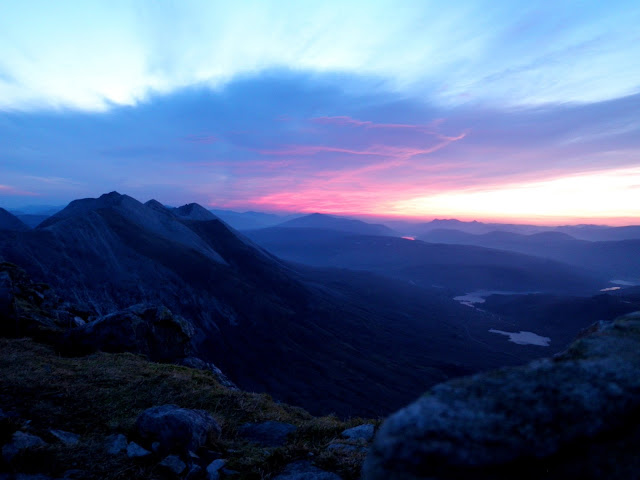 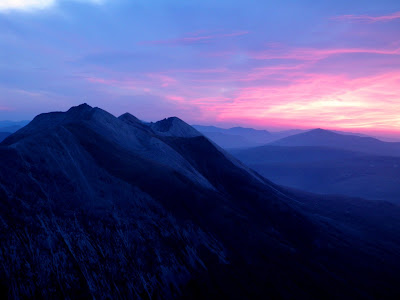 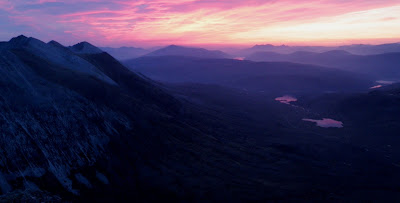 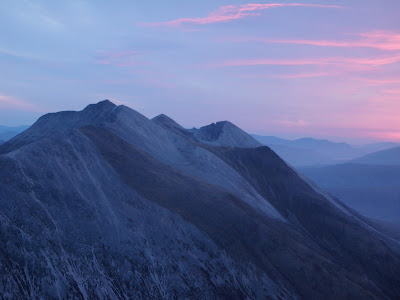 Then, having left most of my equipment behind a rock, I walked the whole Liathach ridge before breakfast time. Gradually, the clouds that draped several of the Torridon mountains lifted and the results were quite spectacular. 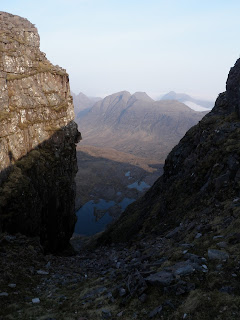 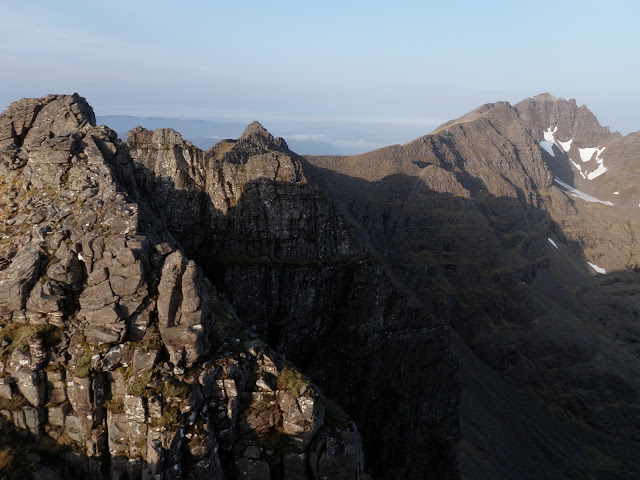 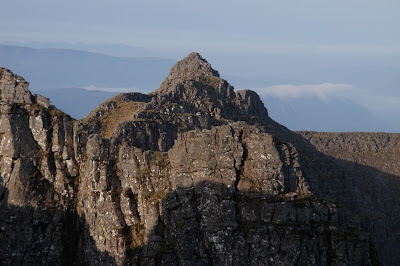 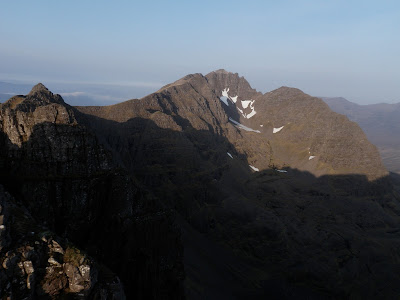 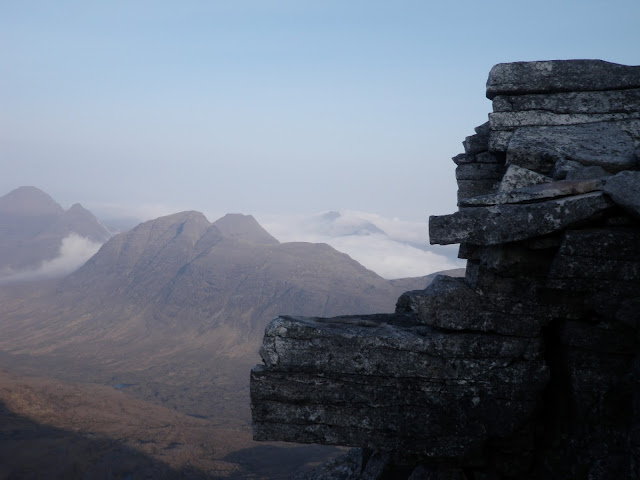 After retracing my steps along the ridges I headed back to the car by early afternoon. 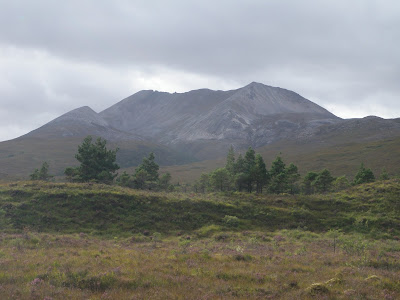 The weather forecast suggested that this day would soon turn into something quite drab, so I decided to leave Torridon behind (if anywhere's in cloud it'll be these mountains) ready to give Applecross a try.
I took my time over the spectacular drive from Torridon to Applecross, briefly stopping off in Applecross village before what is quite rightly described as the most spectacular mountain pass in Britain. I parked at the bottom of this to climb some of the nearby peaks. 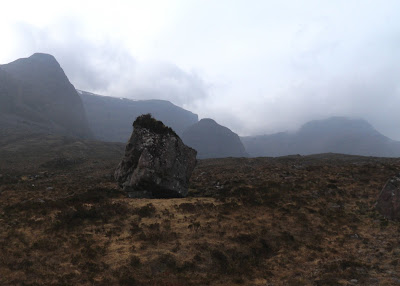 This was a superb couple of days for wildlife. There were lots of dippers on the streams (I sat reading Marshall Sahlins' Western Illusion of Human Nature by a small waterfall waiting for the dippers to pop by, as they did every few minutes). 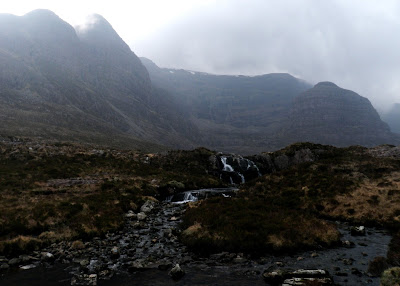 These mountains have a very strange 'stepped' feel - made up of multiple plateaus, each with different, elaborate water features. 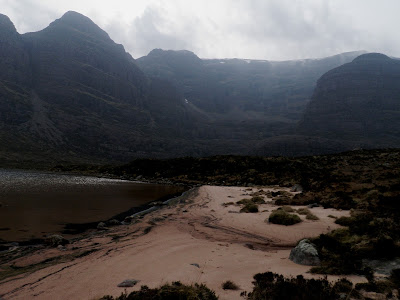 The highlight of the trip happened on the second to last of these plateaus before the climb proper. This plateau was riddled with very narrow but very deep, clear and almost still watercourses. 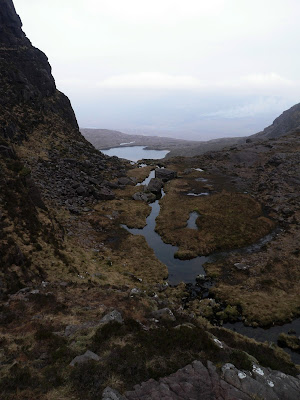 These were packed with breeding frogs - thousands of them. And these frogs were a buffet for two ravens and - when I arrived - a golden eagle. It was quite something to watch the three birds interact cautiously as they feasted on frog. I set up camp on the last plateau and left my equipment behind for the actual climb of these mountains. 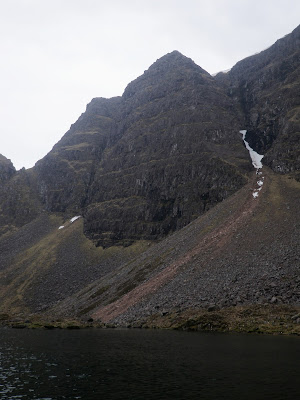 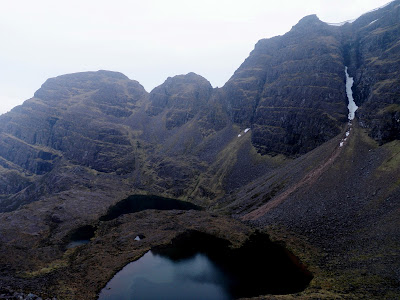 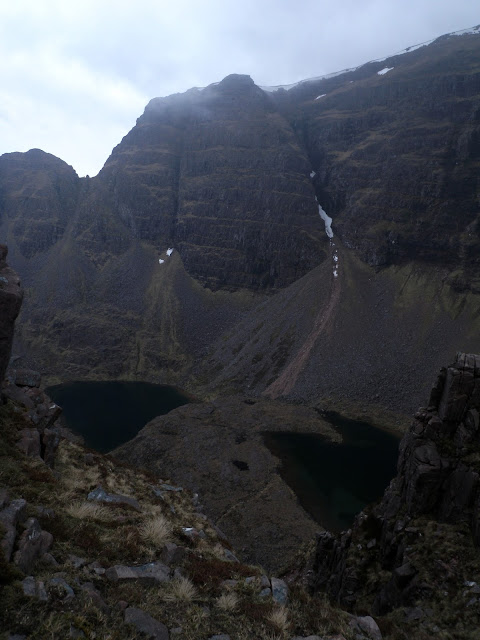 In general, except for the nature, I was disappointed with the Applecross mountains. They lacked that sense of expansive grandeur that I look for in the NW highlands, and if it weren't for the curious incident with the frogs and the eagle I would certainly have wished I'd stayed in Torridon, especially since the cloud level stayed at about 1000m.
Posted by mountaincoastriver