This has been a frustrating few weeks: lots of time kept clear for mountains, but violent winds and storms have meant that peaks wouldn't often be accessible or even visible. So I made do, during December, with trips that don't demand an 8 hour drive each way. I bought myself a Mammut Shield waterproof sleeping bag, very heavily discounted (calling it a Christmas present) and gave it some test drives including in the Brecon Beacons. The sleeping bag is fantastic: just parking it in the snow on mountain tops I've been warm, dry and happy despite extremely grim conditions, with only a few flakes of snow around the shoulders.
The terrible weather meant there hasn't been much to photograph, but I did spend some time tracking Peak District hares on a misty afternoon that involved less actual walking than perching on rocks reading Will Stone's superb translation of Stefan Zweig's Nietzsche. (Given the conditions I decided I'd buy Stone's collection called Glaciation, stocking up on mountain reading, when I got home). 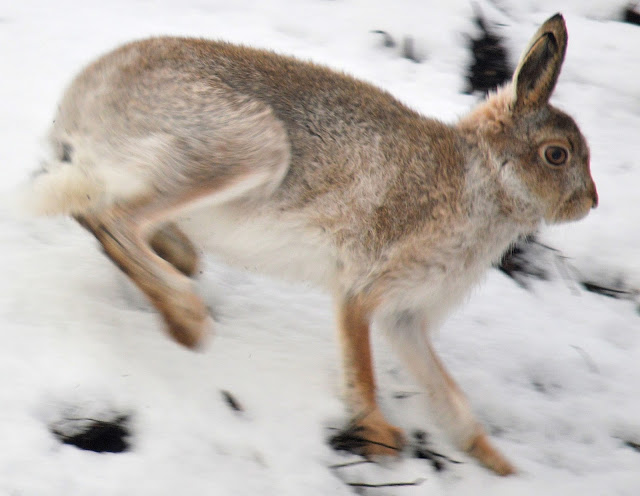 A few days later, on a day between storms, I arrived at the top of Pen y Fan as the sun rose. 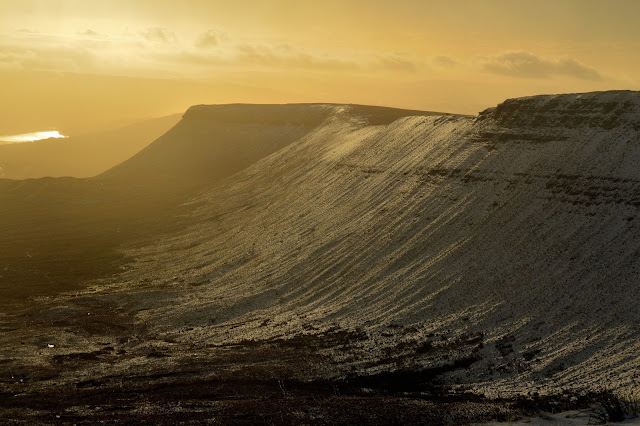 The most fun on this day was when a pair of ravens took a liking to my bag (or rather its cashews and wild boar ham) so decided to defend it at close quarters. 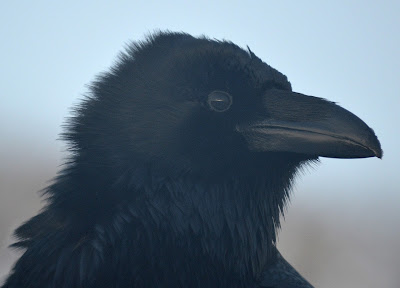 Even when I persuaded them away, they only moved a few feet and hung around until I'd finished breakfast and my chapter. Ravens feed up for the spring season earlier than other birds because they like to breed while there's still snow cover (sheep that die in the snow are an unrivalled source of carrion). So ravens, more than daffodils or blackbird song, really give the first signs of spring... Or maybe their uncharacteristic bravery was actually down to genuine winter deprivation. 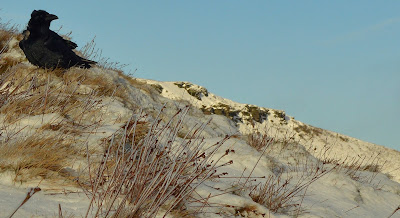 As the day went on there were some decent views of the mountains, but as usual the Brecon Beacons were more like a town park, with crowds and queues, than the outdoors (I'm surprised no one has opened a hot dog stand on Pen y Fan). 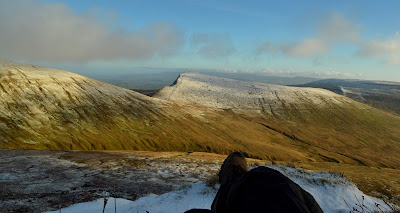 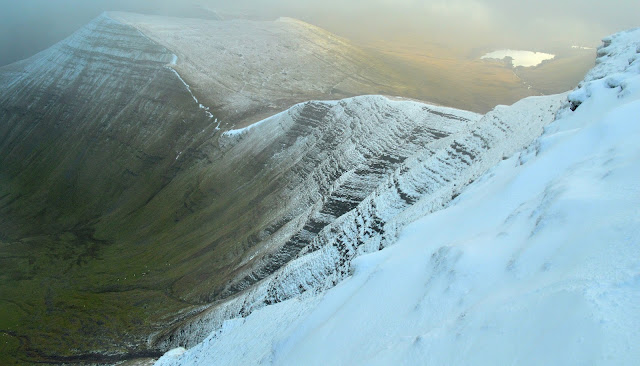 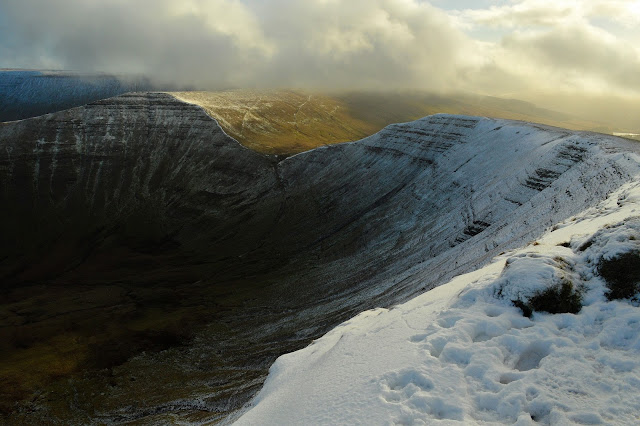 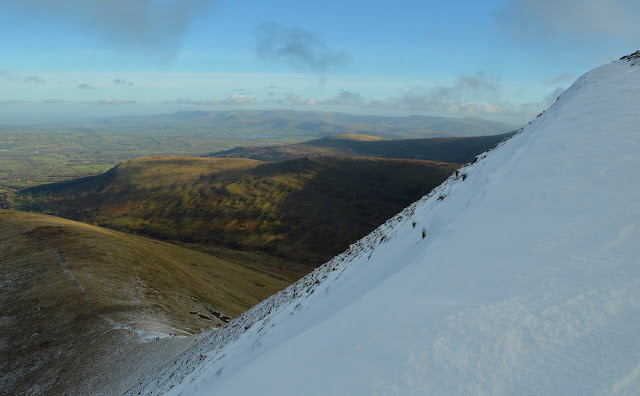 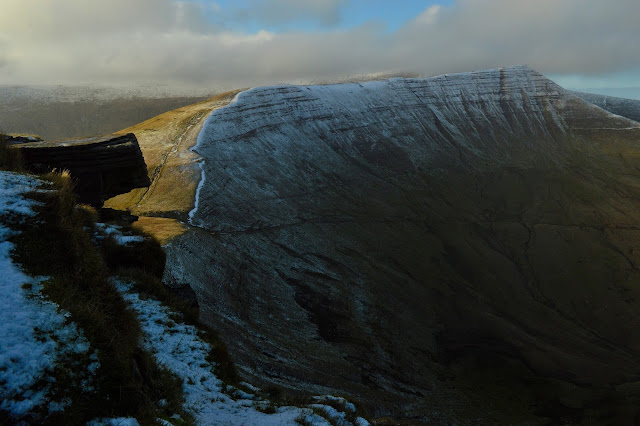 Shortly before sundown the predicted weather front came in and the views ended for the day. The Mammut sleeping bag did its job wonderfully, keeping me cosy in freezing fog.
At the beginning of January I decided I couldn't wait any longer. Storms and strong westerly gales were forecast, but the mountain weather forecast contained the word 'bright', so I decided to head to Glen Affric.
It was anything but bright (which didn't make for impressive photos I'm afraid). On the day of the drive up I made for two of Glen Affric's most accessible Munros, Tom a' Coinich & Toll Creagach. Parking at Chisholme bridge, the walk in to these mountains is quick and simple, along a reasonable track with only a few streams to ford. It was quickly getting dark by the time I hit the slopes, and the constant drizzle meant that views were limited:

I made it above the snowline just as the last light faded, and put the new sleeping bag down in the snow-filled corrie beneath the ridge between the two munros. Due to all this drizzle the snow was really unpleasant to walk on (or rather, wade through). But I found a picturesque spot with expansive views to the south and up to Tom a' Choinich's ridges: 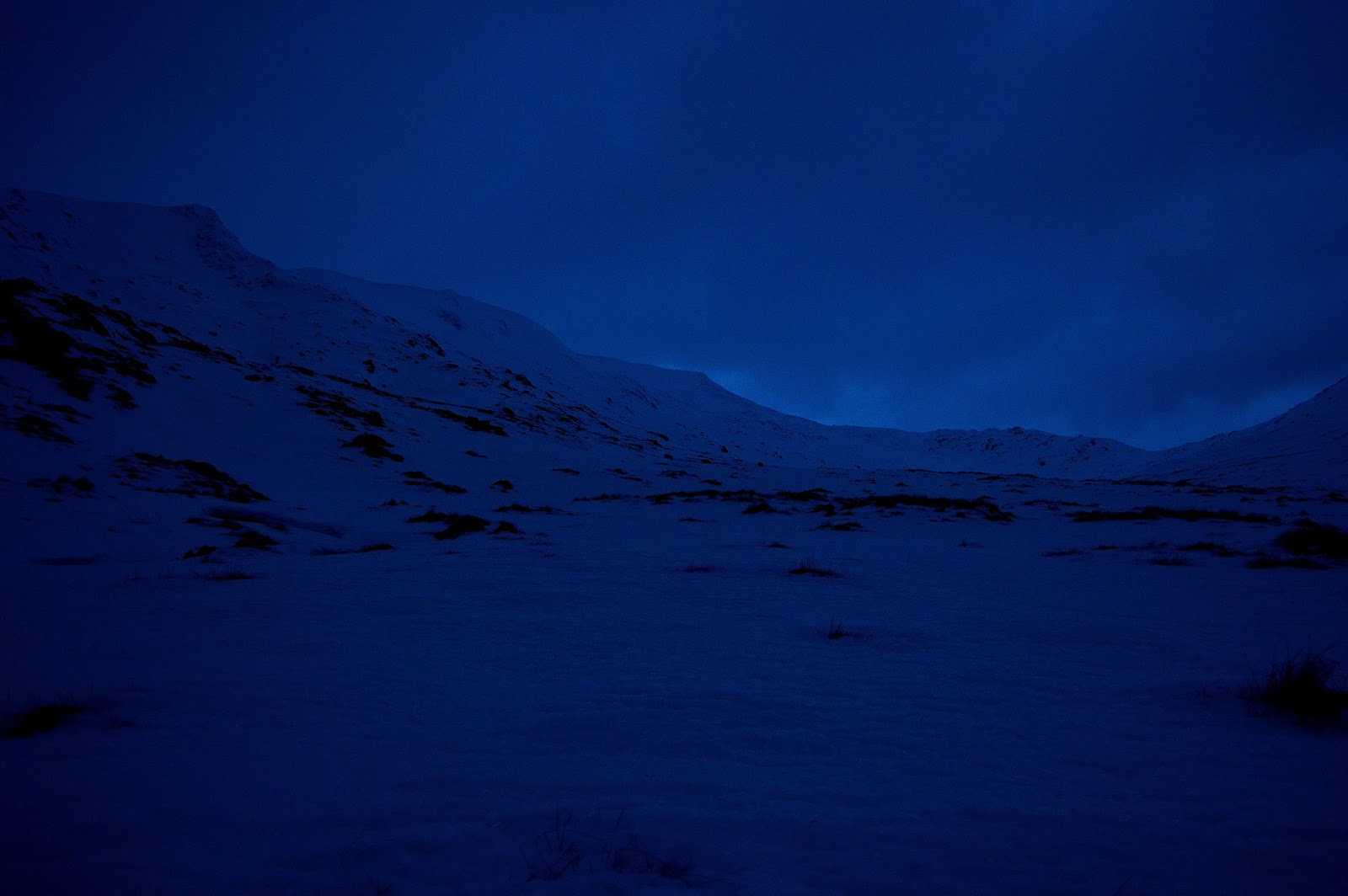 This was a spot well protected from Westerlies, but before long the wind had turned south-westerly  and this was a very squally night indeed. It rained hard and constantly: not a good time to spend my first Scottish winter night in just a sleeping bag! By morning, everything - clothes, books, food and self - was soaked through and the rain had made the snow even more tiresome to negotiate. The peaks were well and truly cloud-bound. The forecast from yesterday suggested things might be a little 'brighter' north of the great glen, so I decided to give up on Glen Affric and head north (perhaps using the Kinlochewe bunkhouse to dry things out tonight).
Driving through Beauly and Contin, things were indeed 'bright', but it was clear that all the mountains were swathed in very dark, immobile cloud which was shedding almost constant rain. I decided to head for a medium-sized lump on the edge of Loch Maree, Meall A' Ghiuthais. I'd noticed on past visits to Torridon that, at 887m this outlier from Beinn Eighe tended to escape cloud that smothered the higher things in the main ranges. The afternoon light, such as it was, was doing interesting things across the glen.

And by the time the first of the ridges before the Meall was breached evening already seemed to be closing in. It was barely five hours since dawn. Obligingly, in a brief gap in the rain Slioch momentarily emerged from cloud. 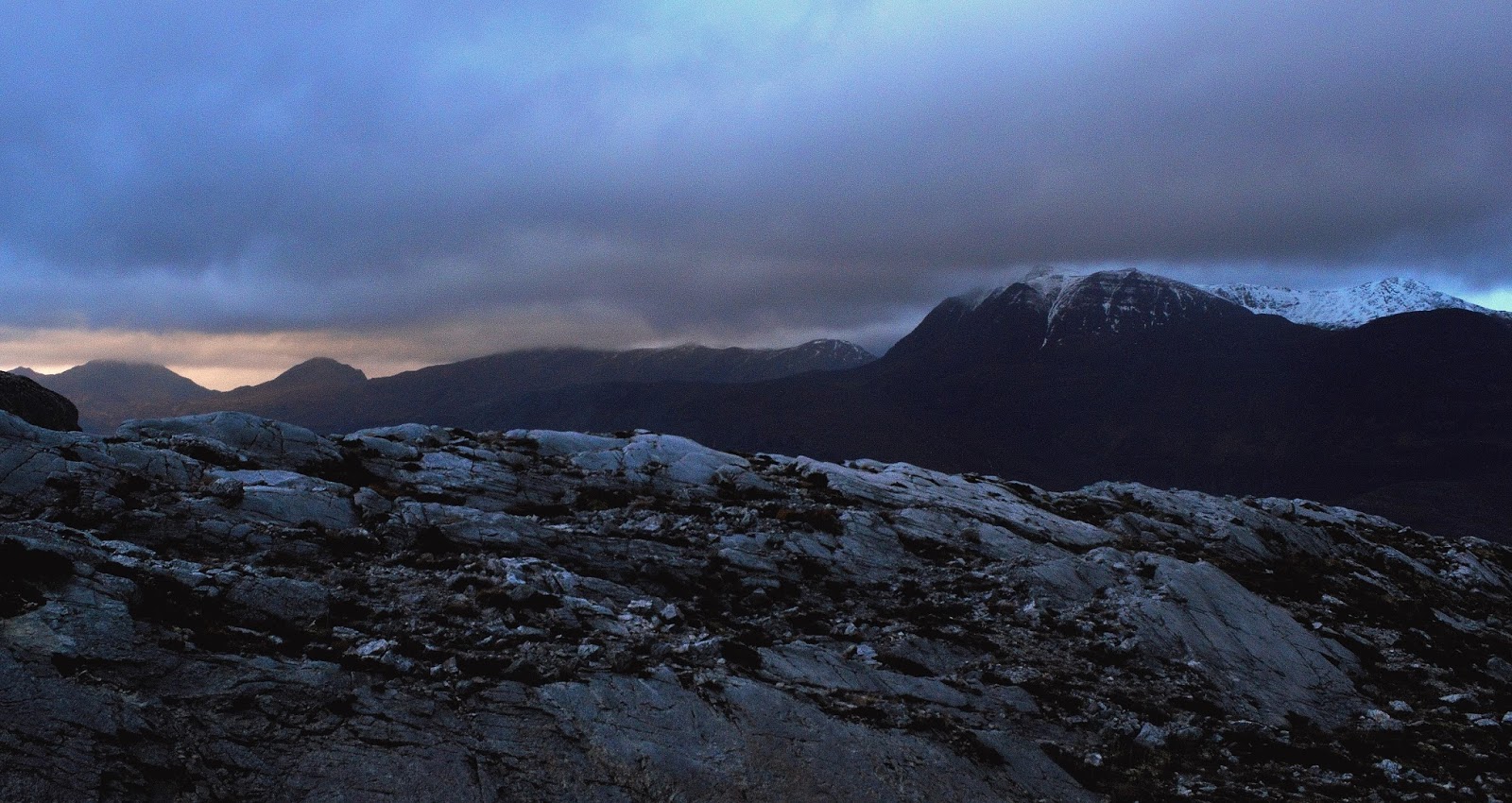 The Meall was indeed escaping the worst of the cloud, although not the rain. I decided not to sleep on the top, but on this shoulder (c.560m) where there was at least some possibility of shelter from the gales. I dropped my rucksack off and ran up to the top (taking a torch for the way back). It wasn't possible to see a great deal, but the occasional hints at view did suggest real grandeur: I decided to make it back up here at the next opportunity. 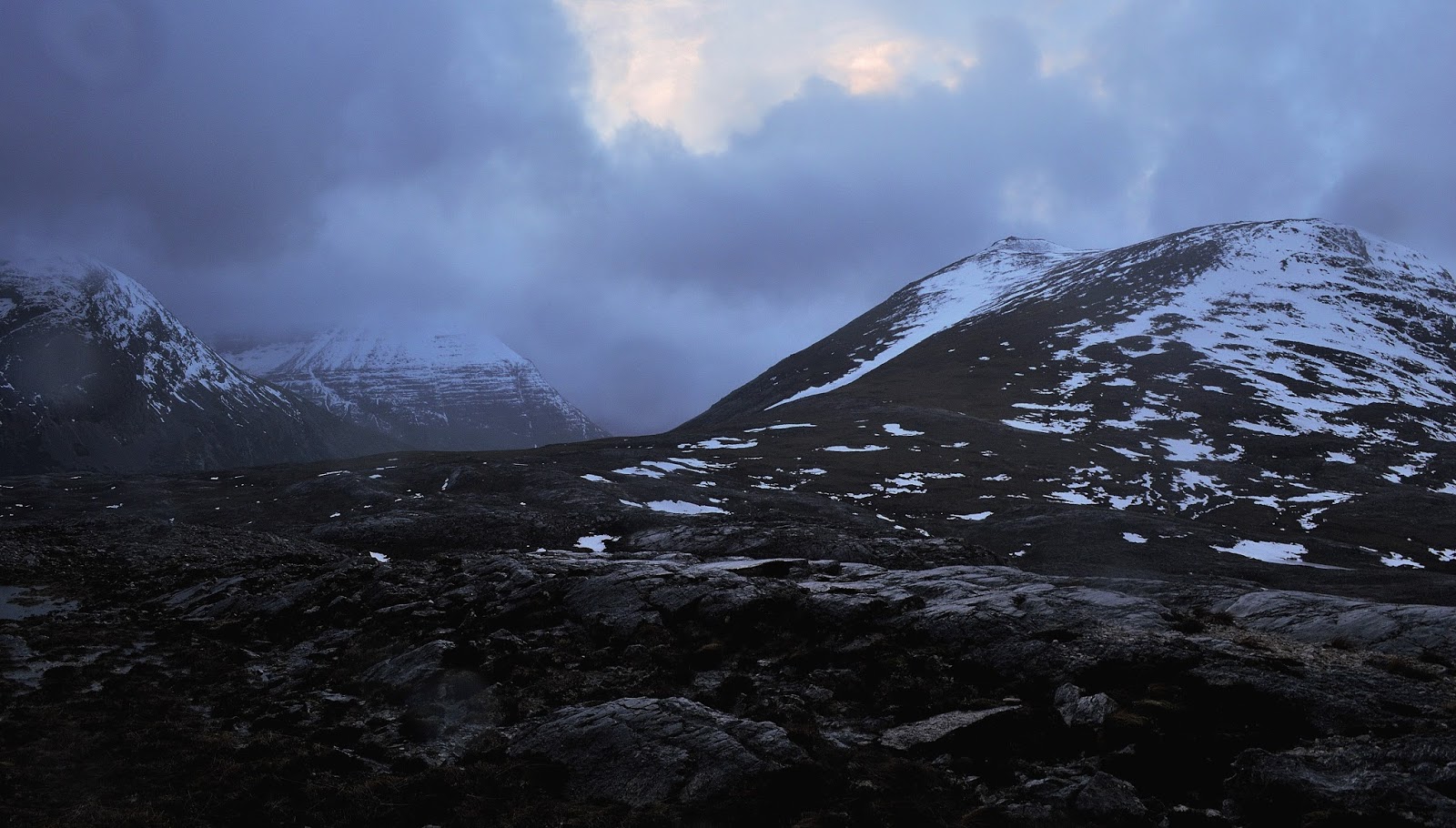 It was another wet night, but some shelter from the wind made it much more comfortable than the previous one. Next morning the cloud level had fallen ridiculously low. The only real option was to head for the coast.
I headed through Torridon village and past Wester Alligin without a single sighting of a mountain. Along the coast, even in the middle of the day the dark clouds almost entirely kept the sun at bay. They remained between 100m & 200m (!) until well after lunchtime. Only occasionally did some light break through:

Gradually, visibility improved a little, showing just how complex a coastline this is: in some places it could take a whole day to walk a couple of miles as the crow flies:

Eventually, there were even views of the Trotternish peninsula on Skye: 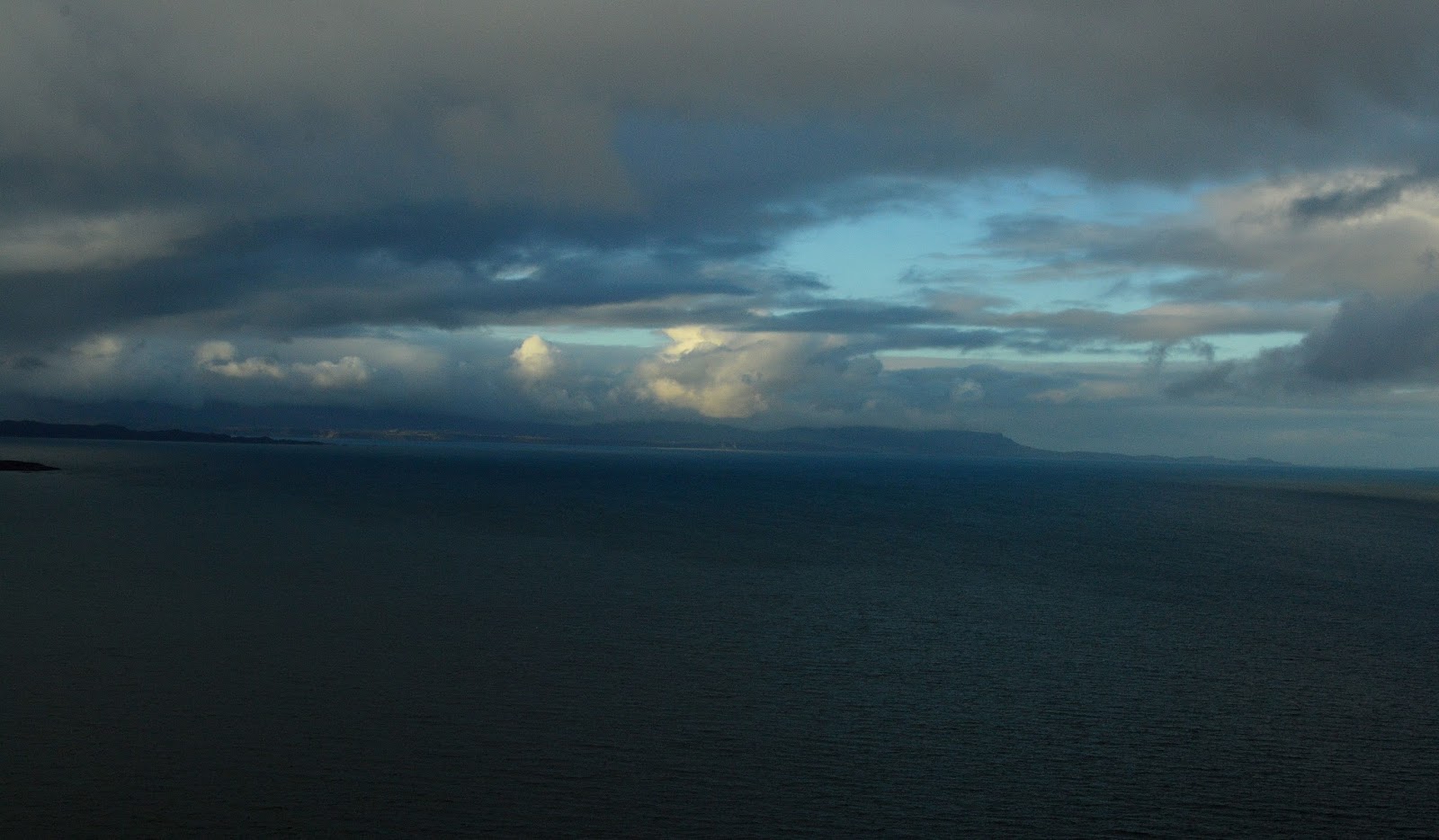 The northernmost point of Trotternish, Rubha Hunish (the low land seen on the right here, after the cliffs fall away) is a stunning point to spend a July night. Climb down the cliffs, onto the grassy peninsula, and you'll find an idyll that's free from the midges that plague most of Skye in summer. Basking sharks hug the coastline, coming within metres of anyone on the shore; minke whales feed not far off shore; otters and seals populate the beaches. But Rubha Hunish in July felt very distant from Diabaig in January - even though the peaks of Harris, apparently bathed in sunlight, could just about be made out to the West: 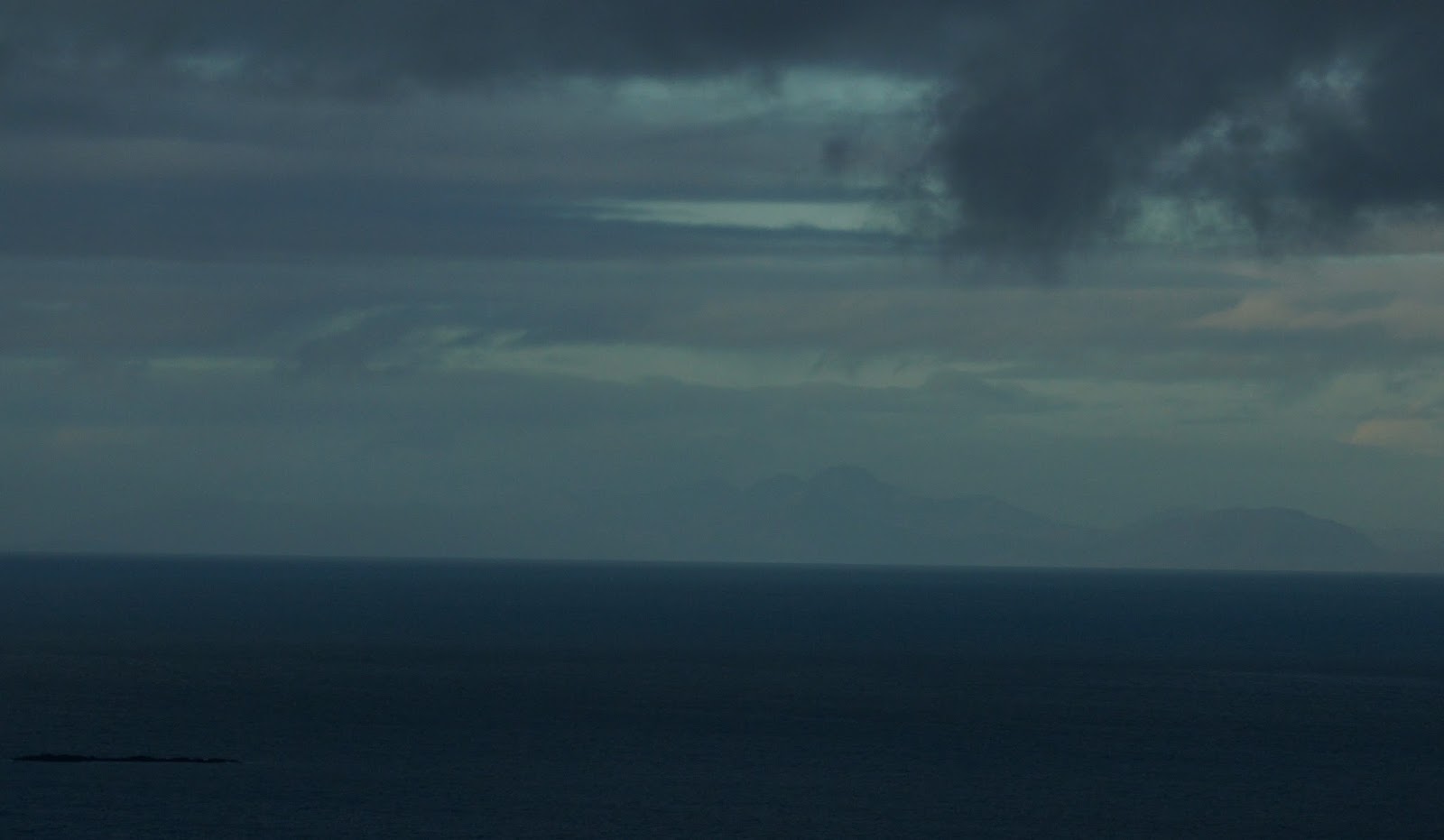 After spending a while on the coast reading some of Richard Burton's new biography of Bunting, I decided to head up from the coast towards the lower slopes of Beinn Alligin to find a sleeping spot that would take advantage of whatever views might appear. Although Alligin, Liathach and Eighe stayed resolutely clothed in cloud, some of the shapely peaks across the glen briefly revealed themselves:

And the evening light was excellent. The first time the clouds had broken up since I arrived:

Then it was back to Torridon for the long drive south. This is certainly the most washed out trip I've ever taken. On the second day the hood only came down two or three times, and then only for a few minutes; everything, including feet, camera and sleeping things were soaked through from the beginning. I think I'll have the loud rustling of wind-blown goretex ringing in my ears for days. Next time maybe I won't let impatience get the better of me... 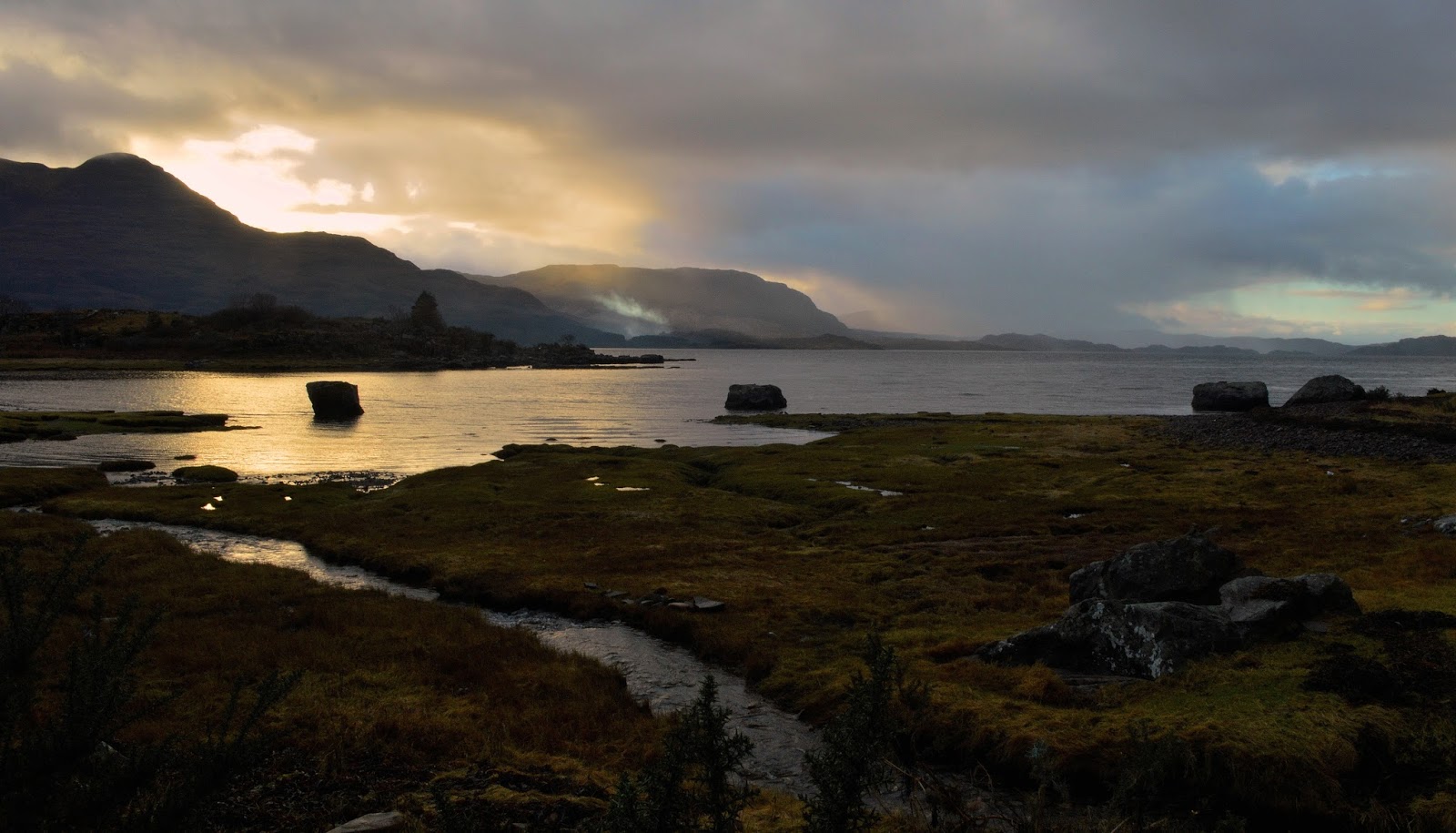 At least when I got back there was time to play with falcons: 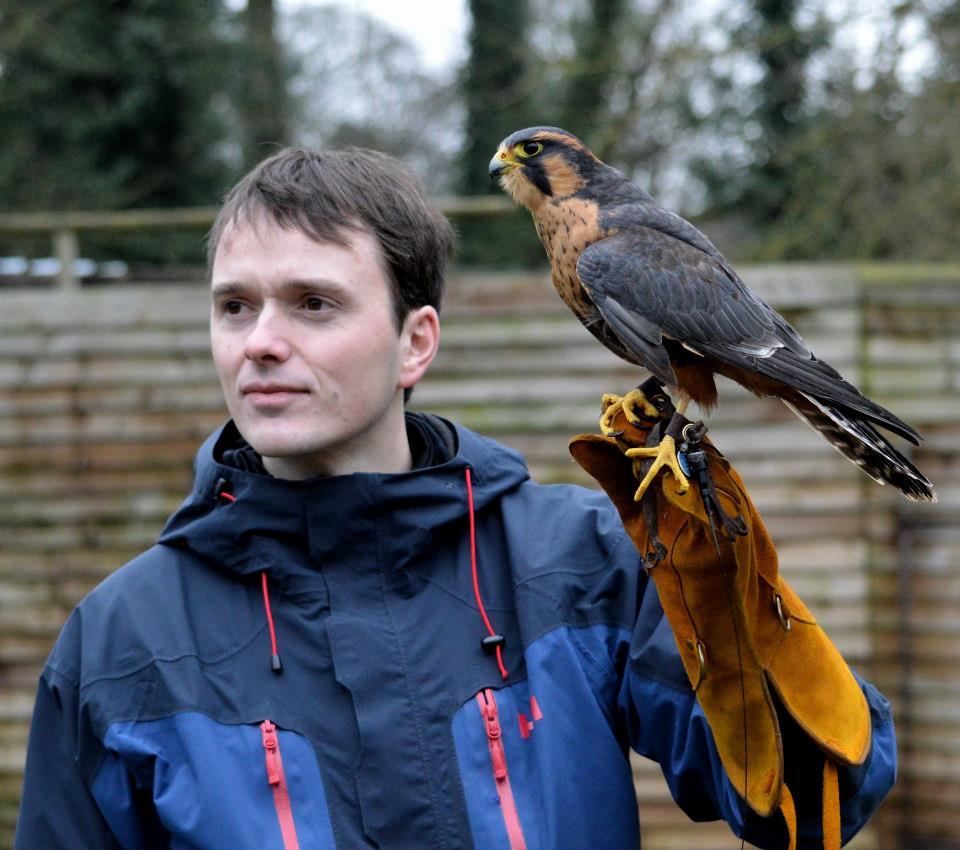