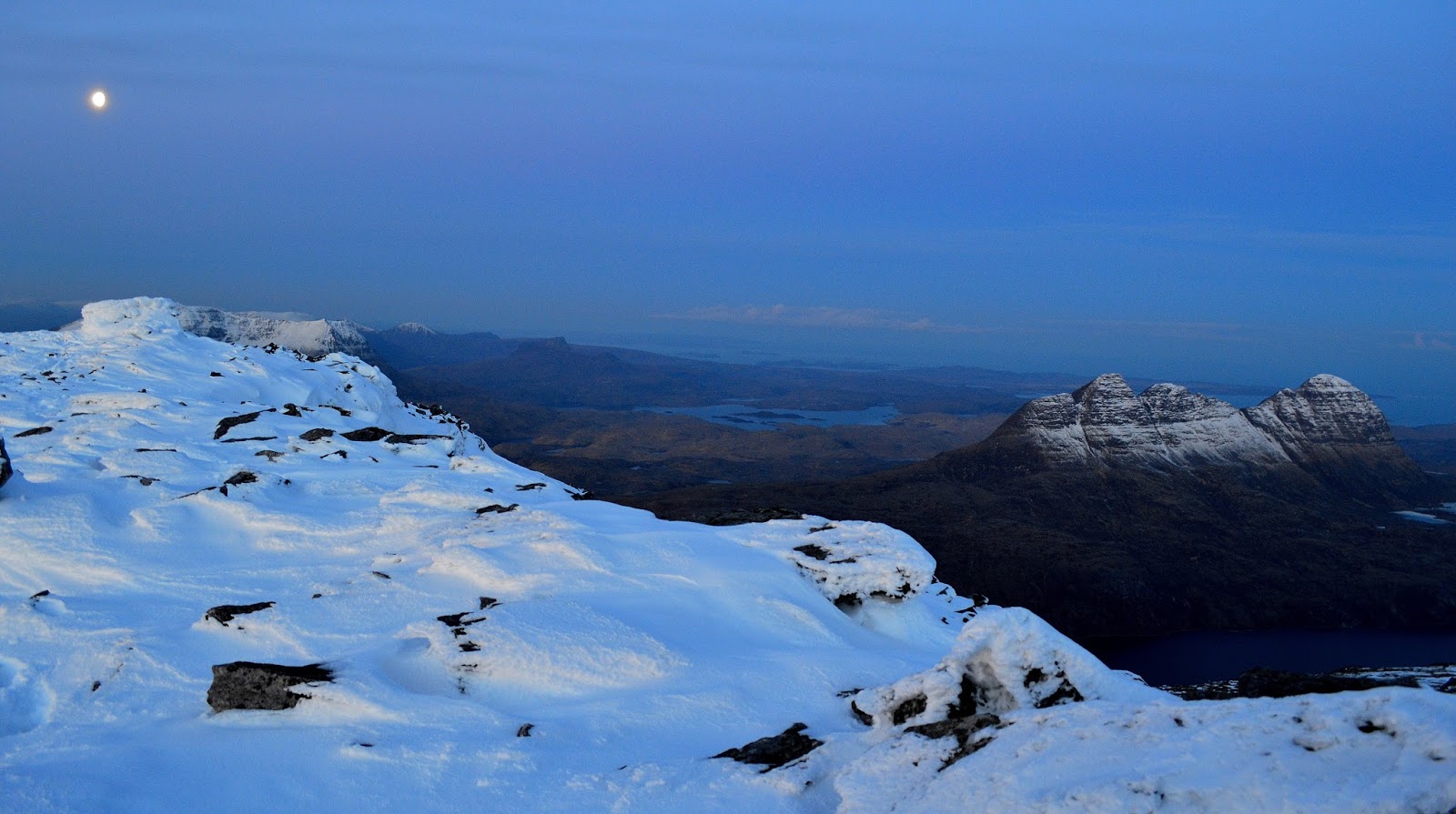 This very, very cold March meant there was beautifully firm snow alongside long days: an unusual, and stunning, combination. Foinaven and Arkle are among Scotland's most northerly mountains. Once (when it had been mismeasured) Foinaven was the most northerly Munro. Thankfully, its Munro status was removed meaning that these beautiful mountains are now little trodden. It's no coincidence that many of the most satisfying mountains in Scotland are between 900 and 914 metres tall. I arrived at the bottom of Foinaven at the end of a 9 hour drive from Birmingham. 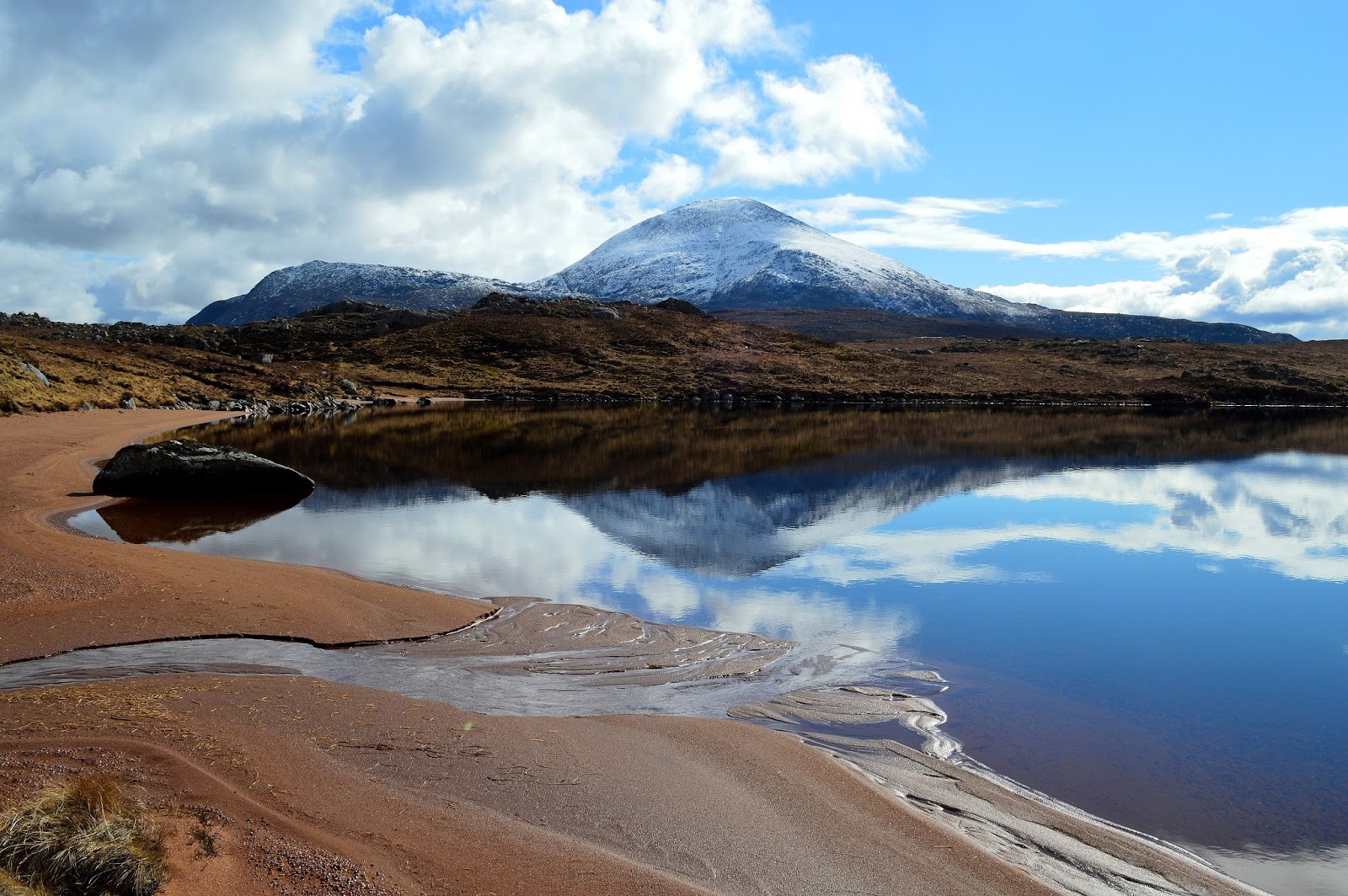 After parking under beautiful blue skies, I crossed the boggy ground (which must be nasty when it's not frozen) to the bottom of the mountain. The intention was to spend the night on the peak, but half way up the very sudden arrival of thick cloud shedding hailstones made a bivi on a lower shoulder more attractive. 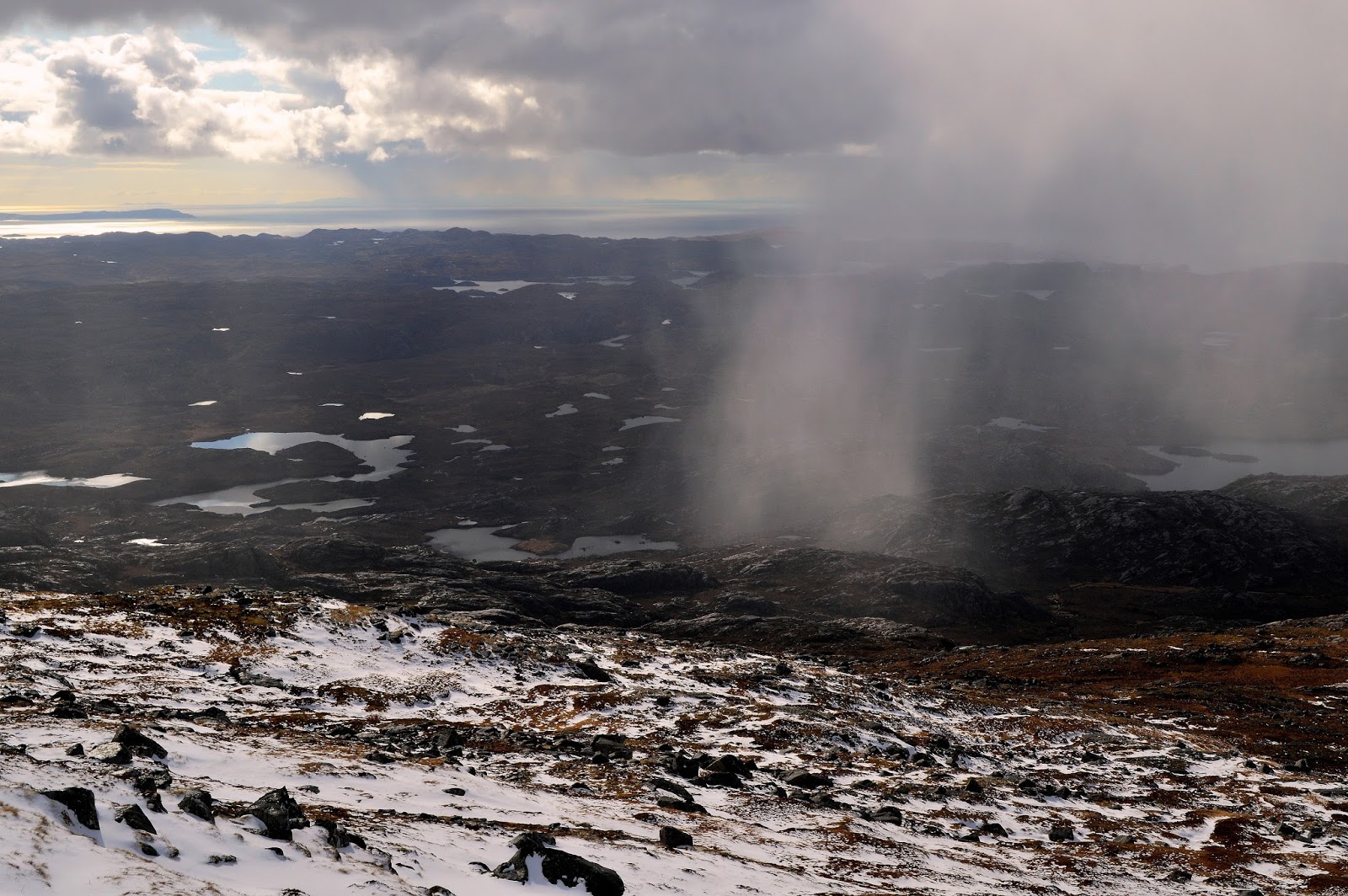 Around sundown the hail cleared, leaving fantastic views south across Assynt and East to Arkel. 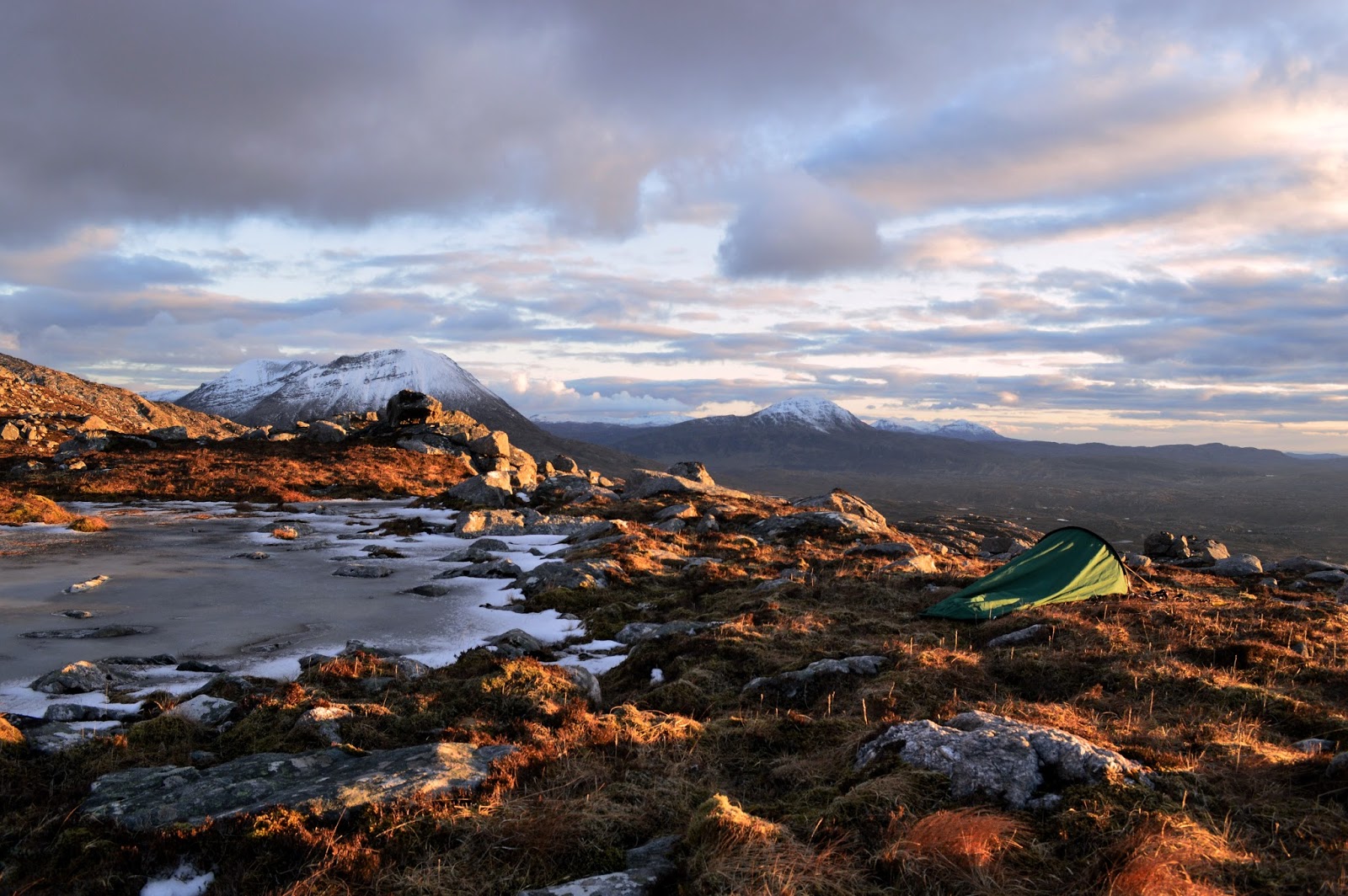 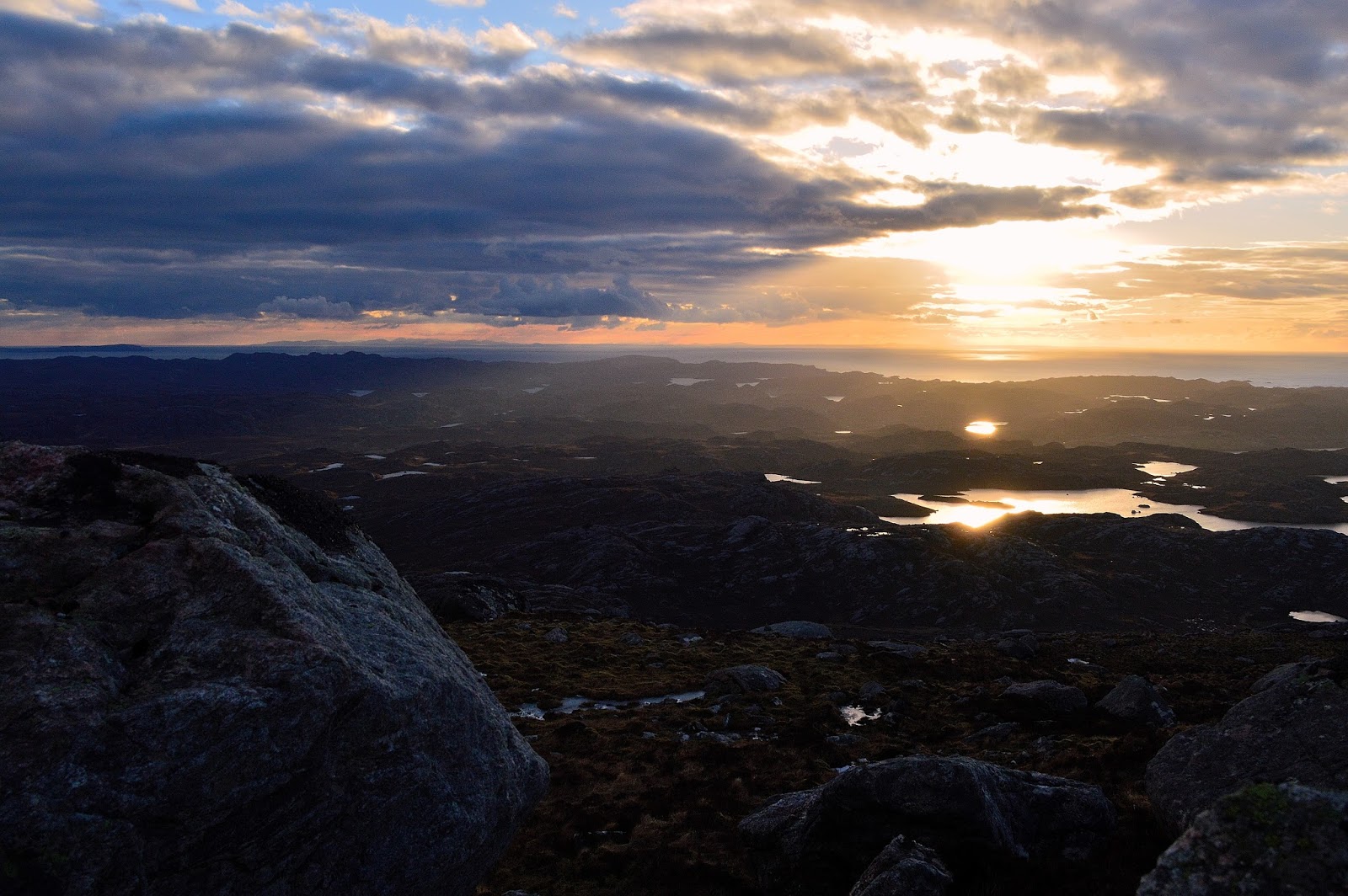 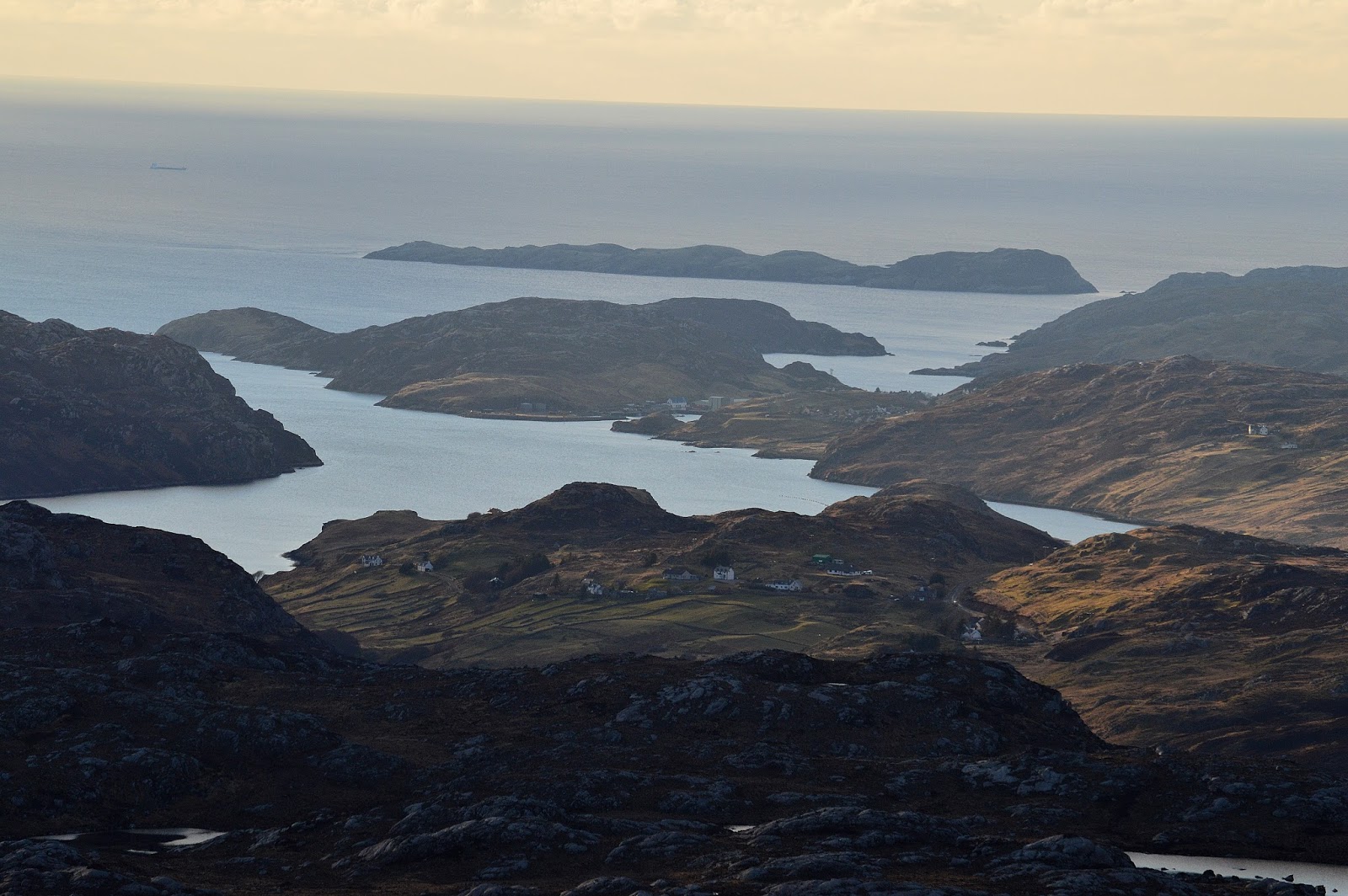 Cloudburst in front of Lewis, looking like a painting by the wonderful Shazia Mahmoud (whose work used to light up my day every time I walked past the art gallery opposite my undergrad accommodation): 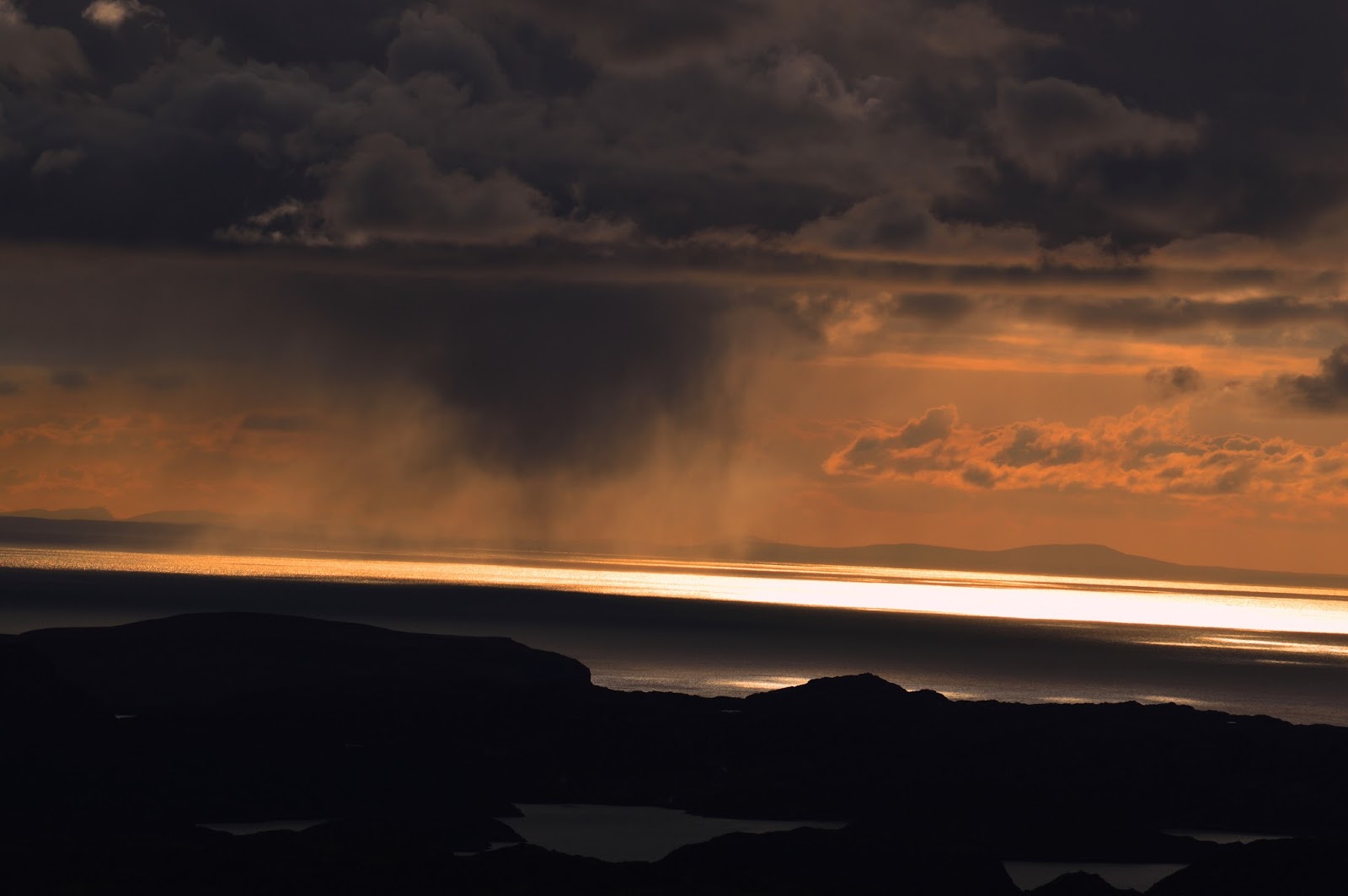 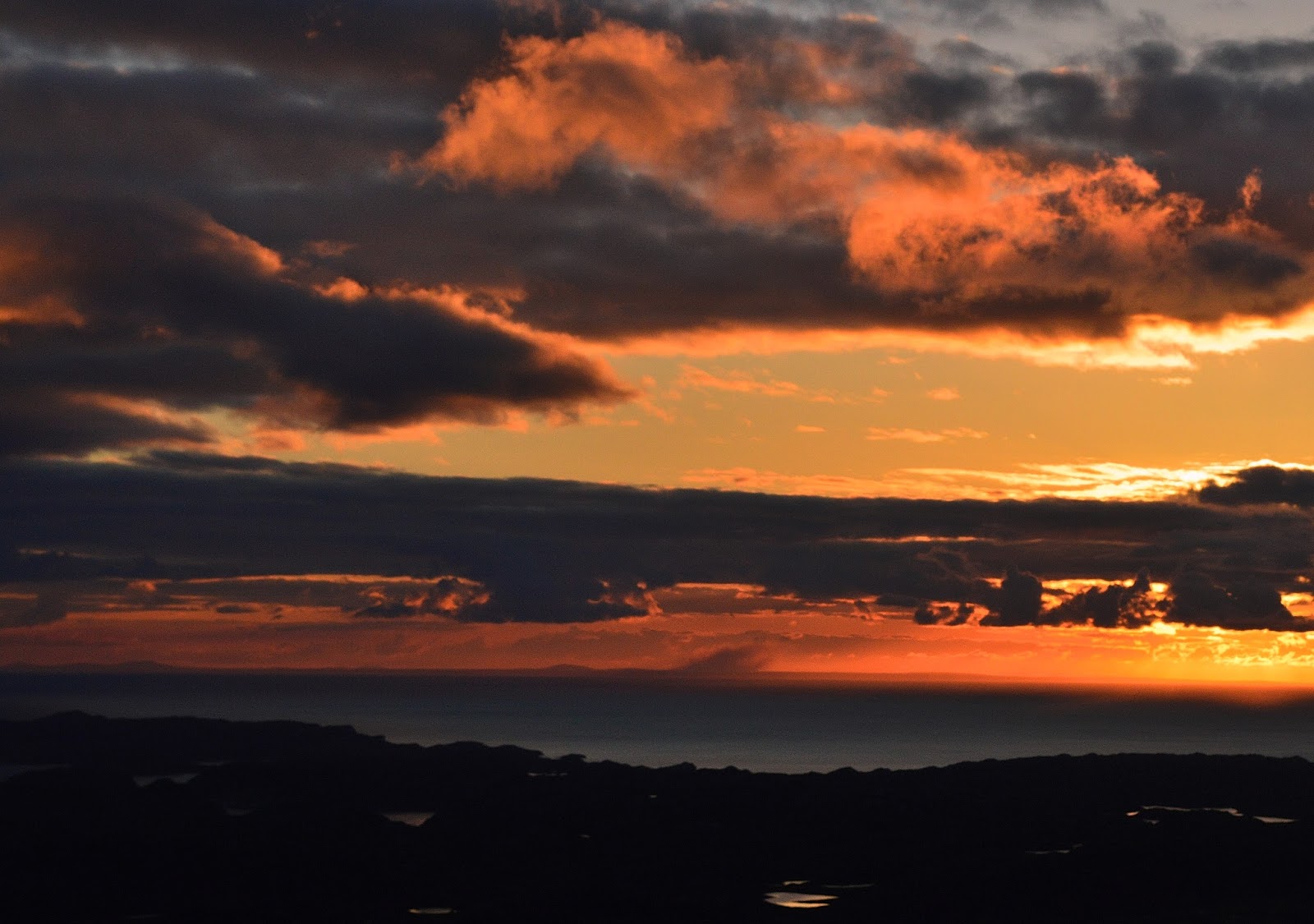 This was a fantastically beautiful night - one of those where you don't close the bivi - lighthouses and constellations were the only lights visible.  I got through several chapters of John Berger's The Shape of a Pocket in between skygazing.
The morning weather was perfect: clear, cold and still. I broke camp before dawn and donned the crampons to climb Foinaven. Snow with virtually no give made for an easy ascent, with fine views of Quinag. 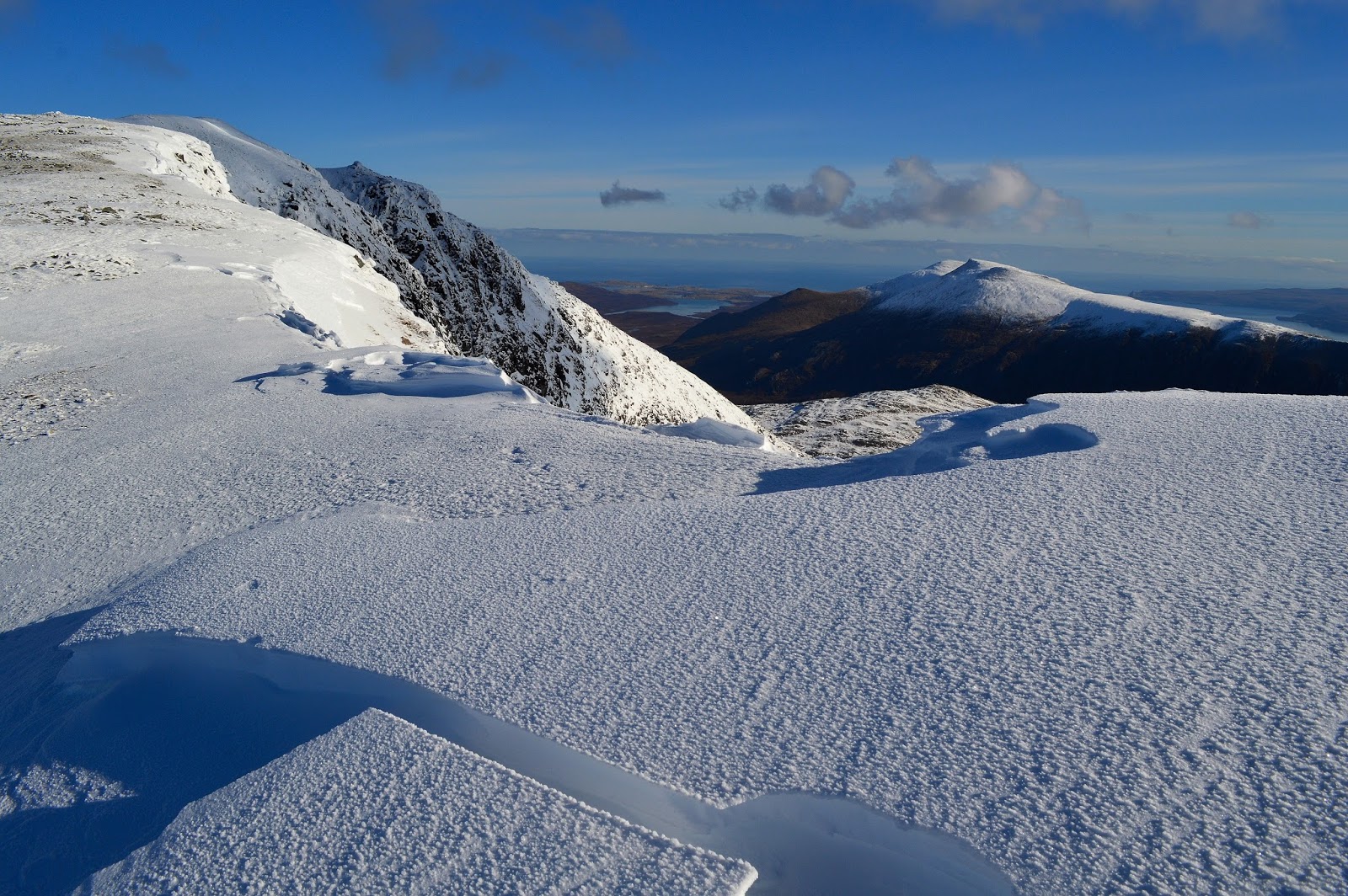 Committed to the belief that mountains should never be goals to reach and vacate, but places to appreciate at as much length as possible I spent a few hours, including breakfast and a little more Berger, on the top. 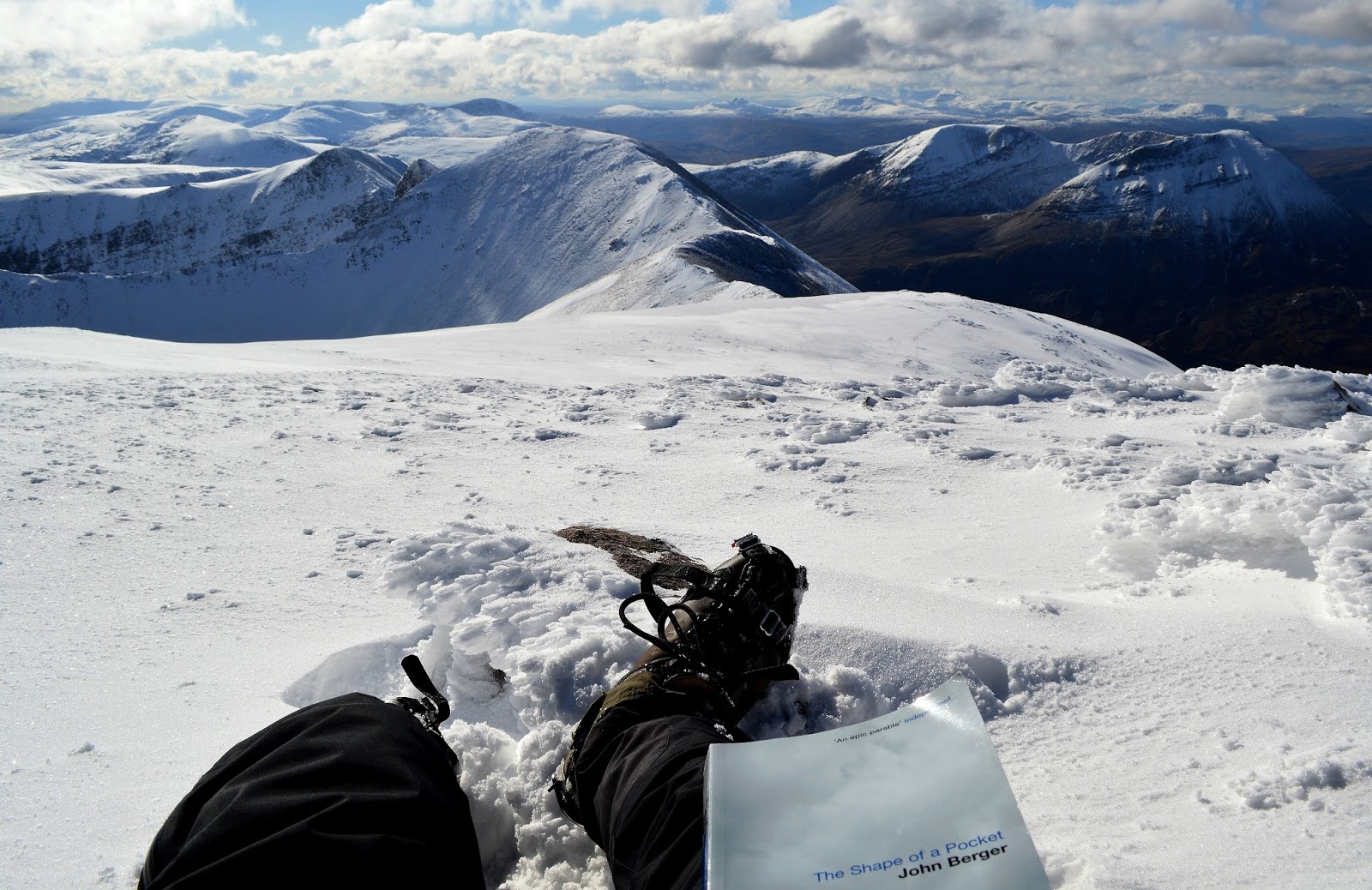 The views across Quinag, Arkle and Bens Hope & Loyal were excellent.

Cairns had been transformed by ice and wind into dramatic ice sculptures. 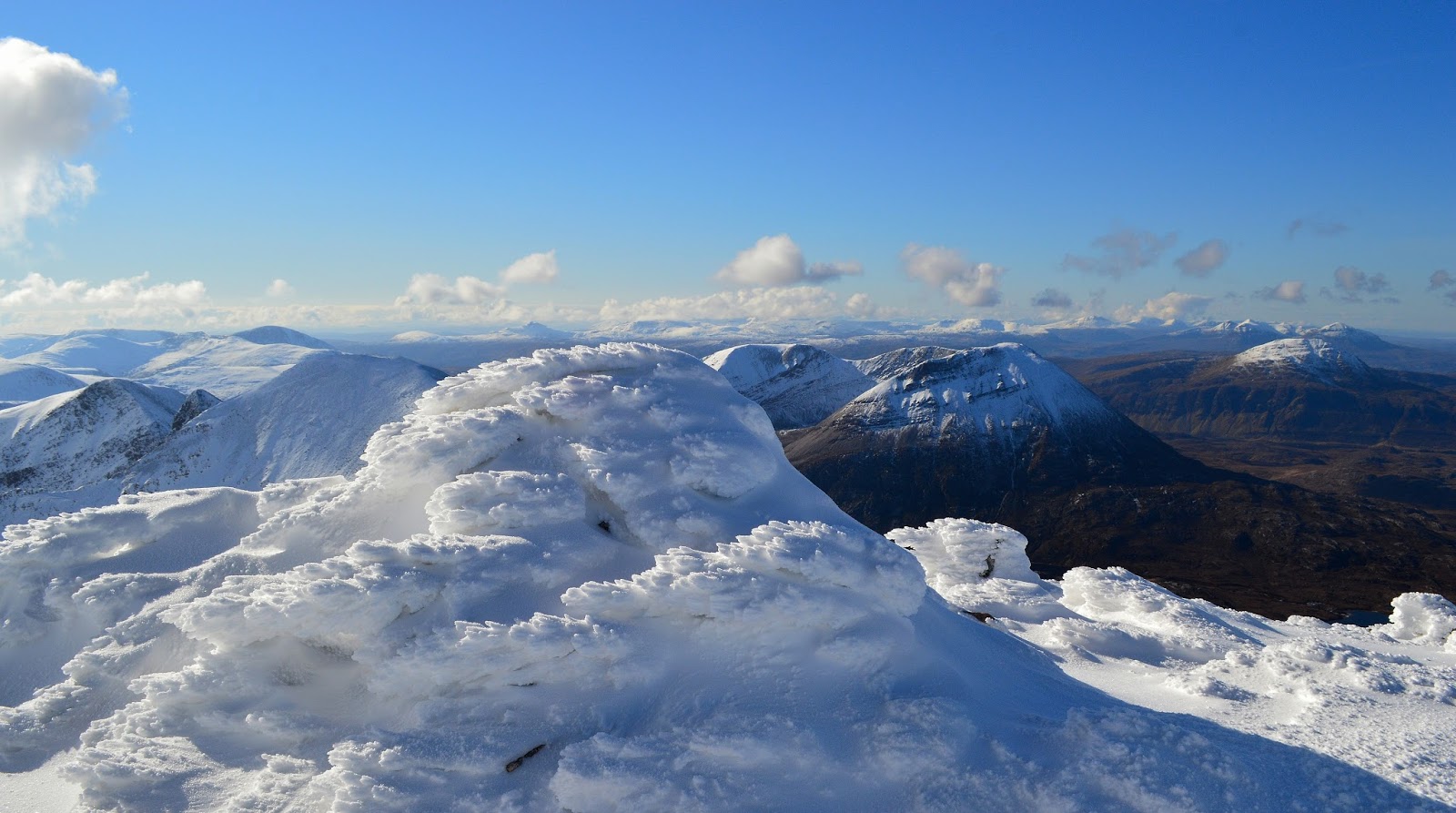 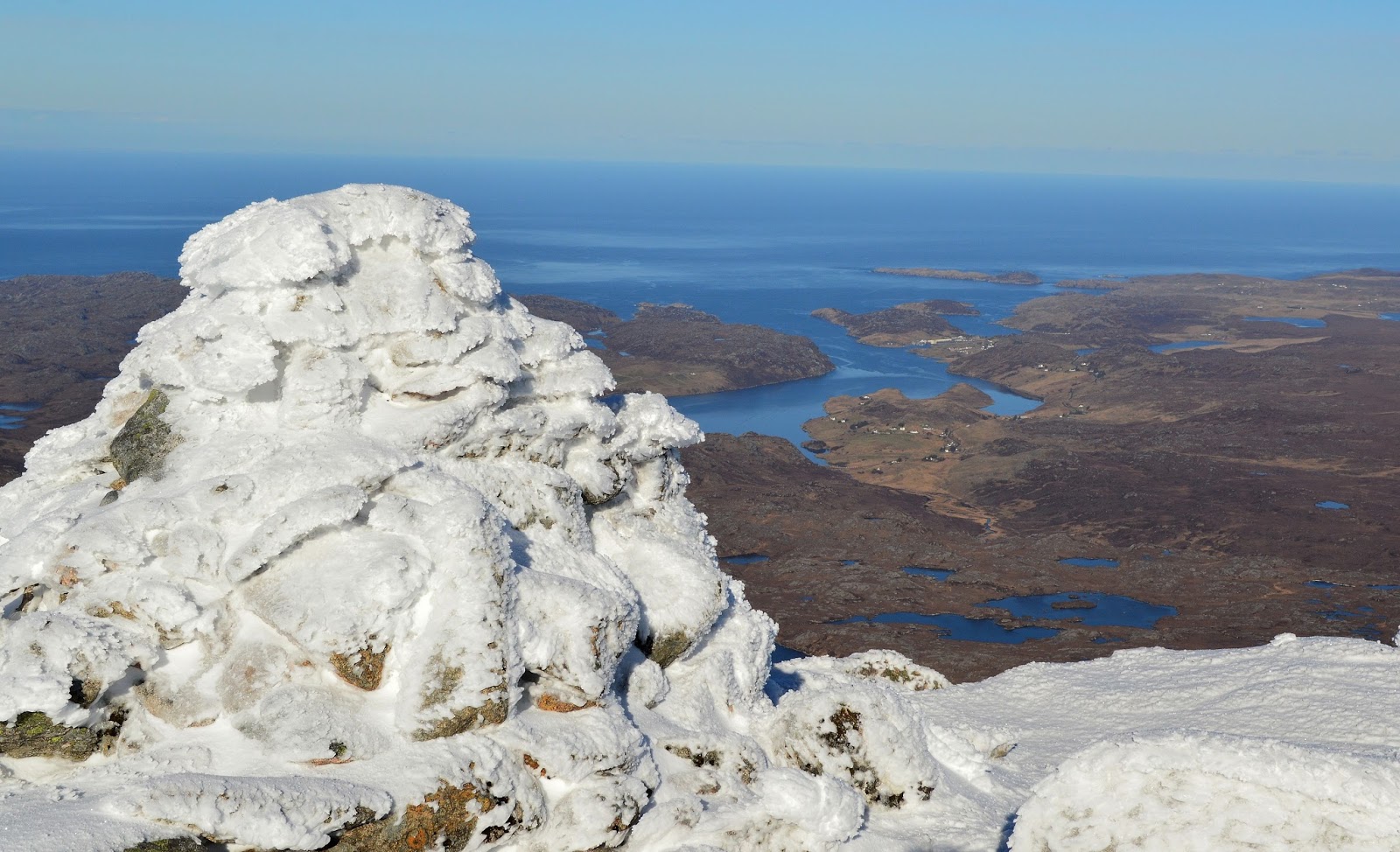 The corries on the north side of Foinaven are quite something and when I did move on, the ridge made for an  exhilarating snow walk/slide/clamber. 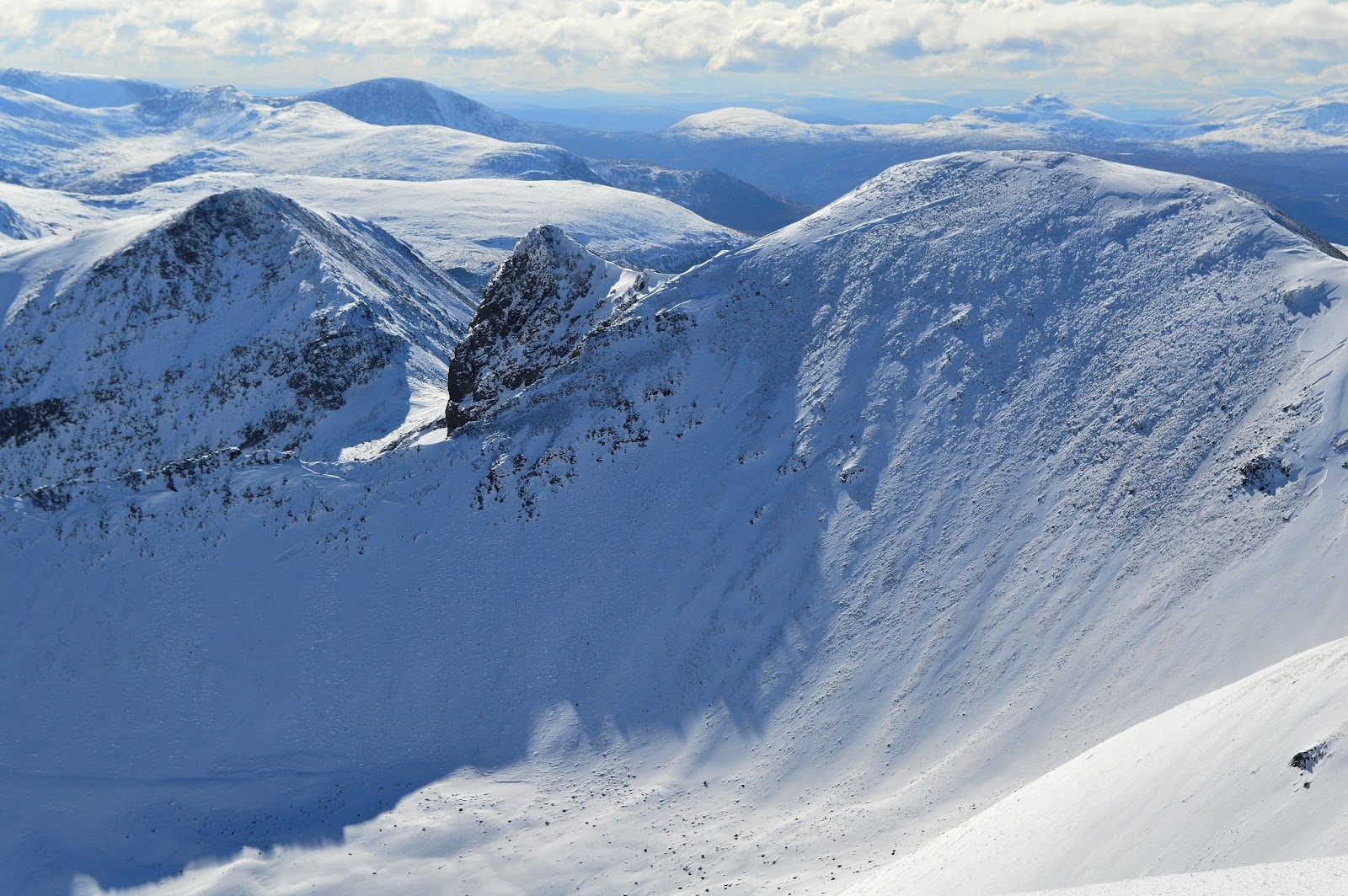 Then it was time for the most difficult part of the trip: the snowbound traverse of Arkle. 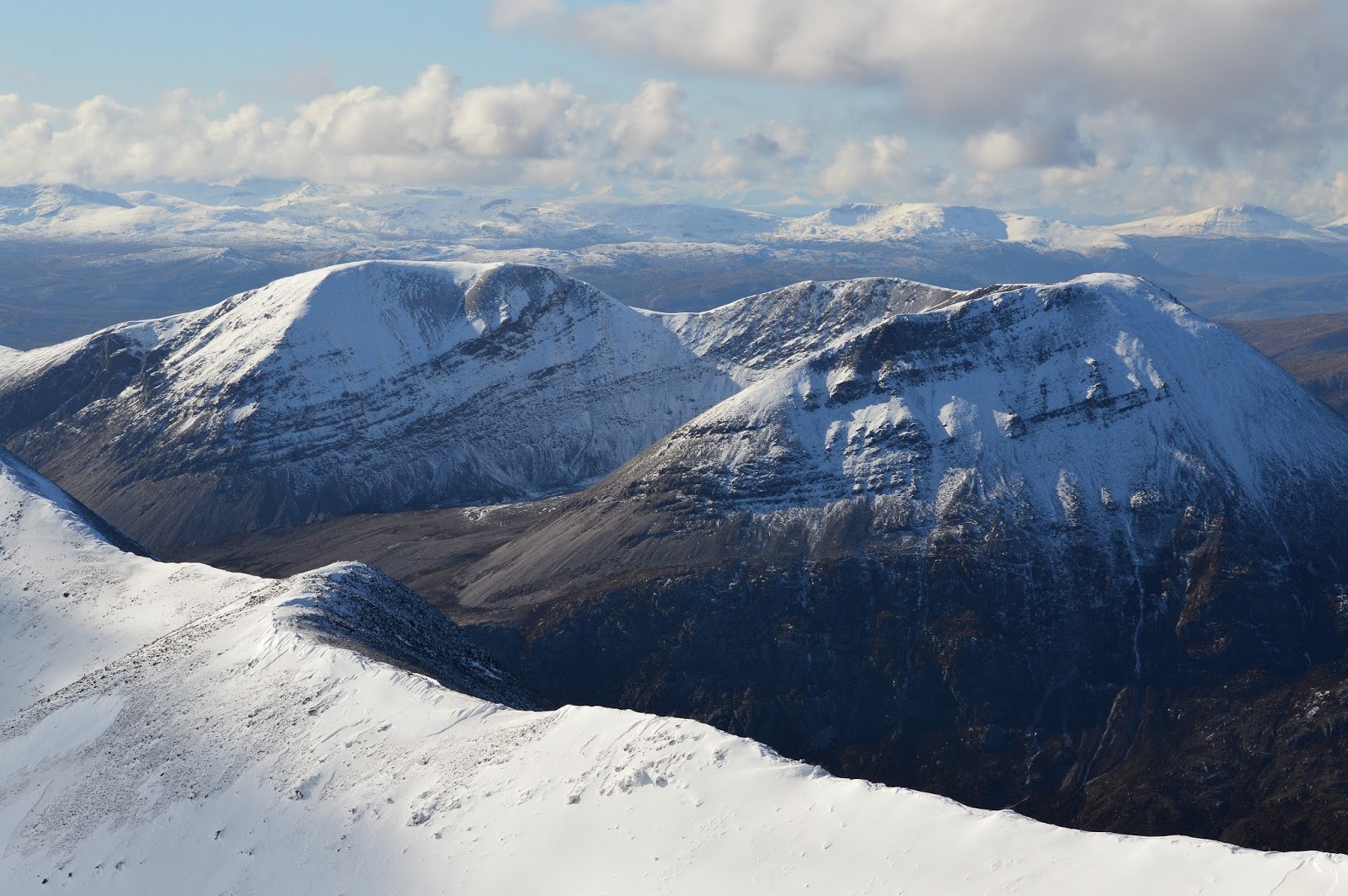 The ascent was hard work in non-technical walking crampons. To make things worse, it soon became clear that the weather was about to turn again with clouds settling on Arkle's ridge. Turning back, however, seemed as dangerous as continuing. There were no views from the top this time, and the wind was becoming increasingly fierce. The descent (the right of the above photo) was horrible: no visibility, shifting snow underfoot and precipitously steep - the one time in the mountains that I have really feared for my life. I made it down just after sunset to bivi within two miles of the car.
Next morning, in rapidly improving weather, I headed south. The steepness of Arkle, alongside the bad weather, had left me feeling a little uncertain of myself on really steep snow so I settled for something gentler for day 3. This still made for a night as close to perfection as the mountains can offer. Conditions were windier and therefore colder, but nice enough to spend on the very top of Canisp. This was my first time on this mountain, so there were some wonderful unfamiliar views of Suilven both at dusk... 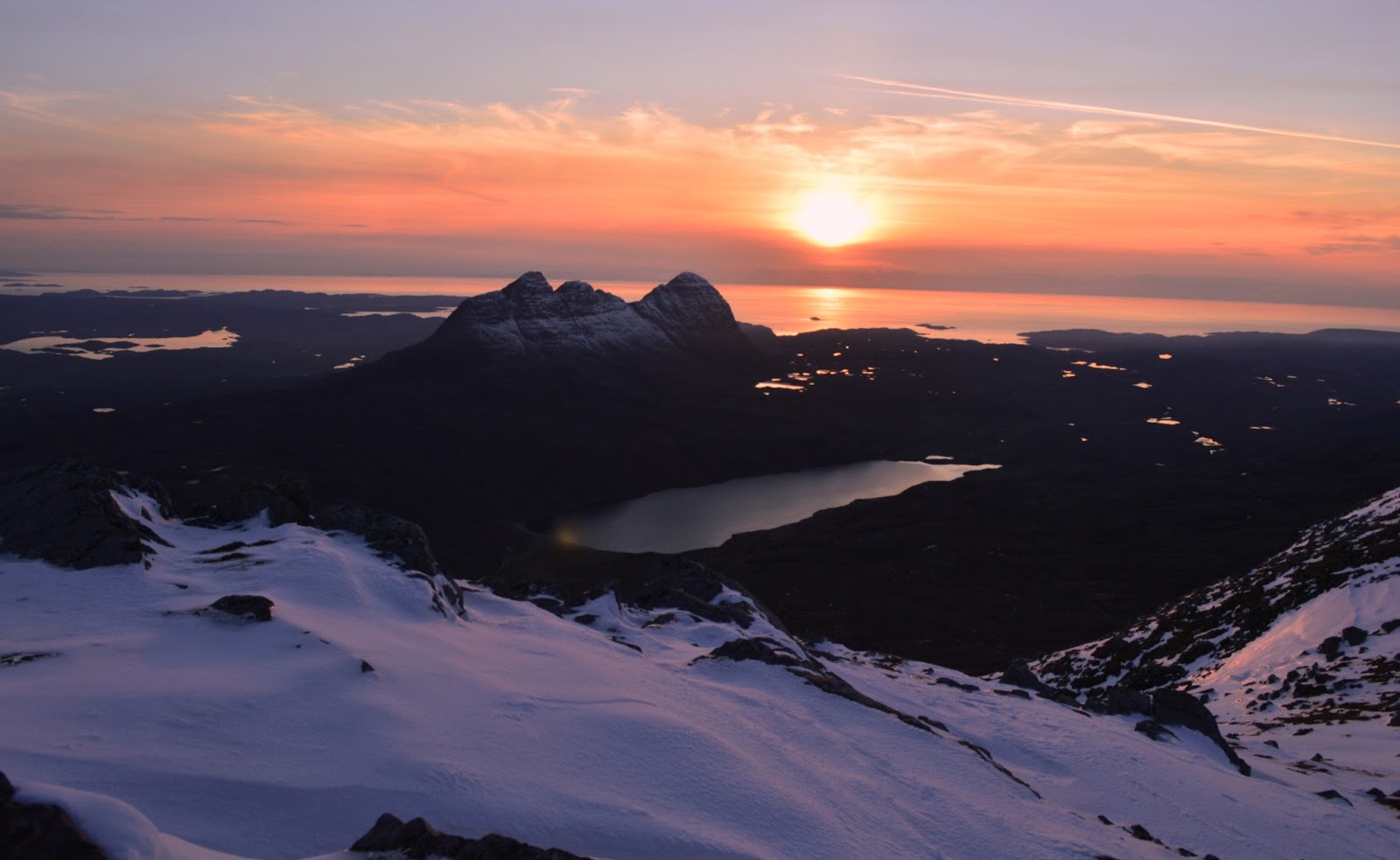 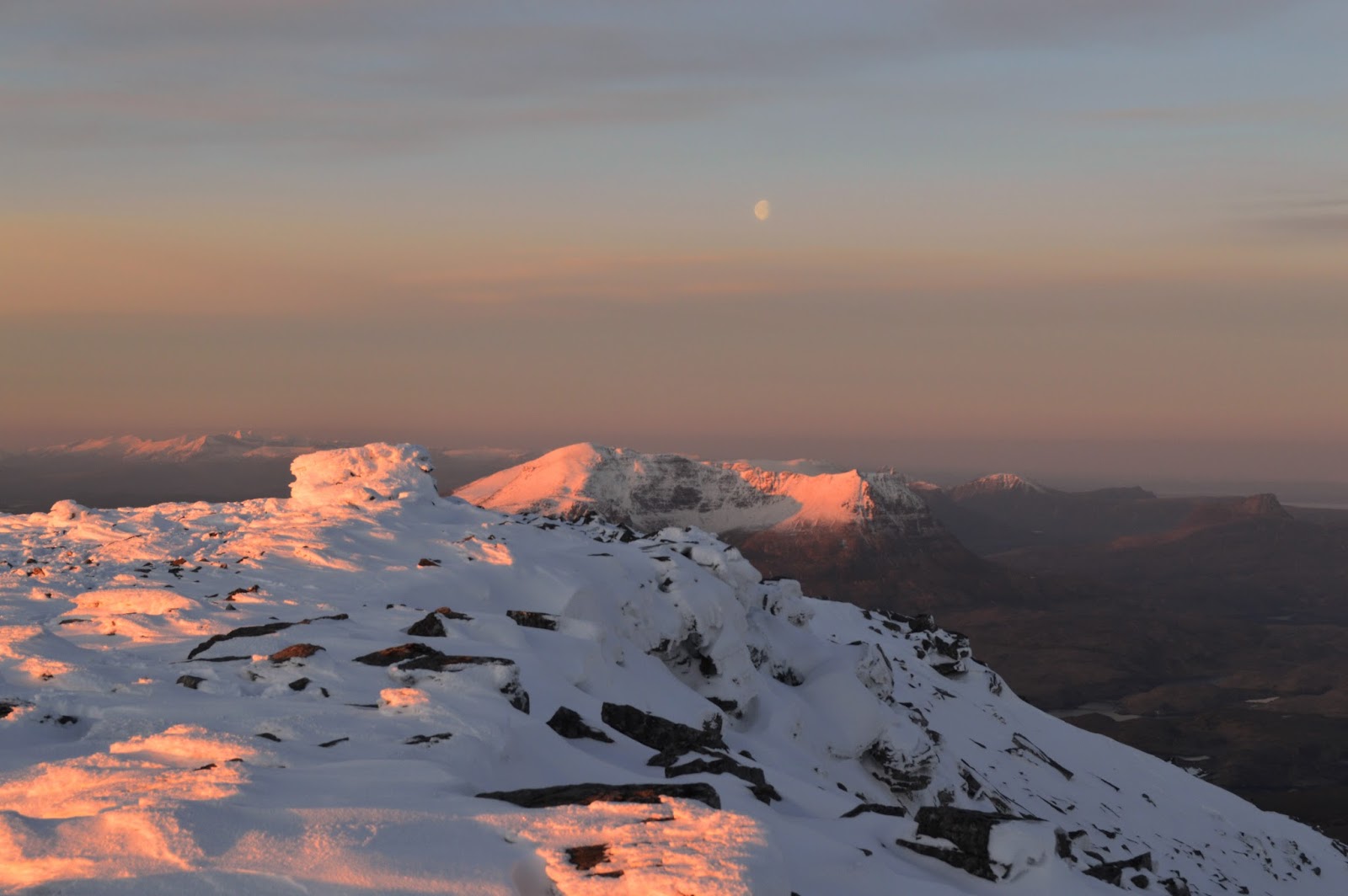 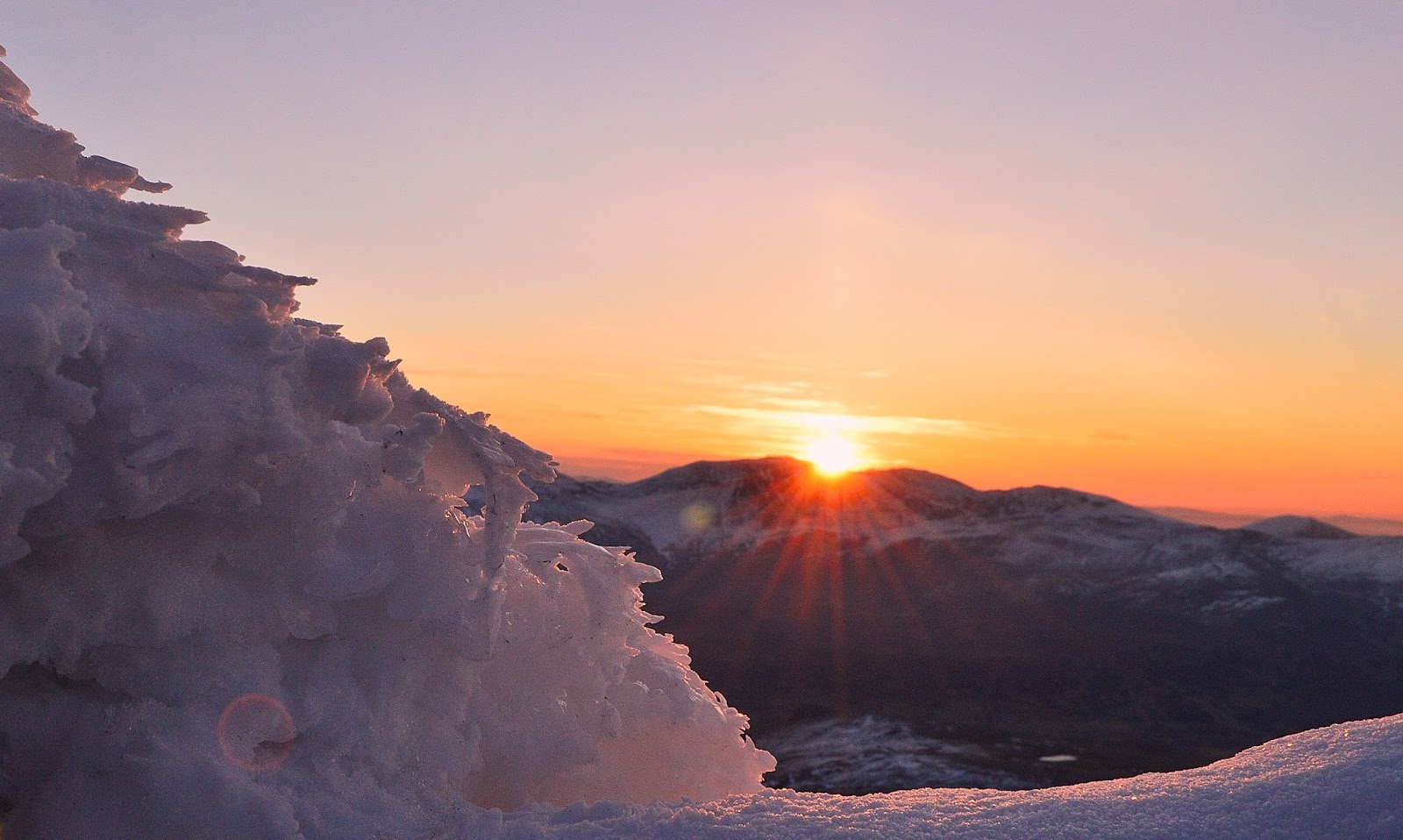 Quinag looked nearly as good from the south as it had from the north.

And a little flock of snow buntings were making full use of the gusts. 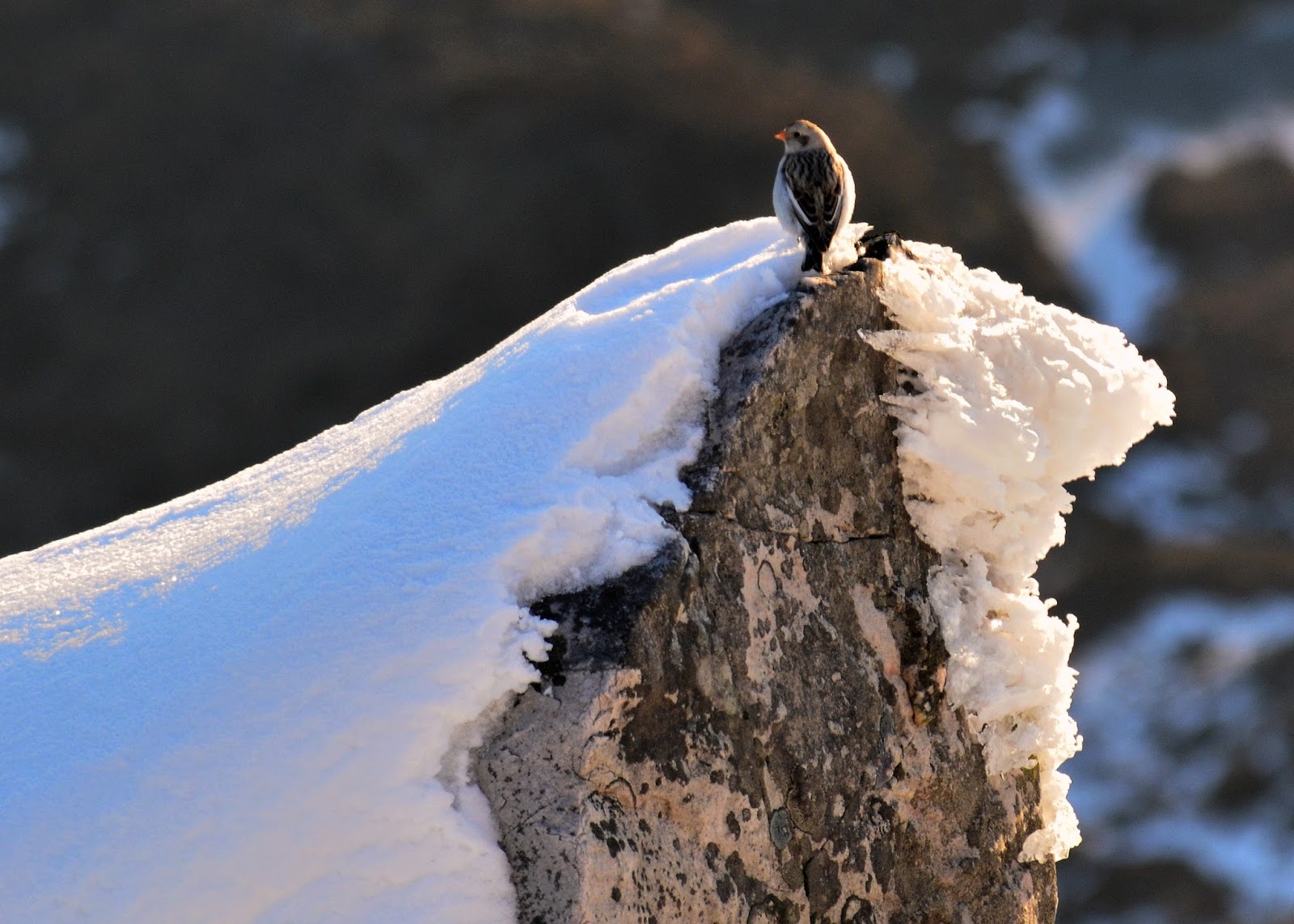 With these kind of temperatures (the lowest I recorded on Canisp was -11, but it must have been colder during the night) three nights is as much as I can comfortably handle in the bivi bag without warm food  or drink and only lightweight gear, so it was time, regretfully, to head back to Birmingham. 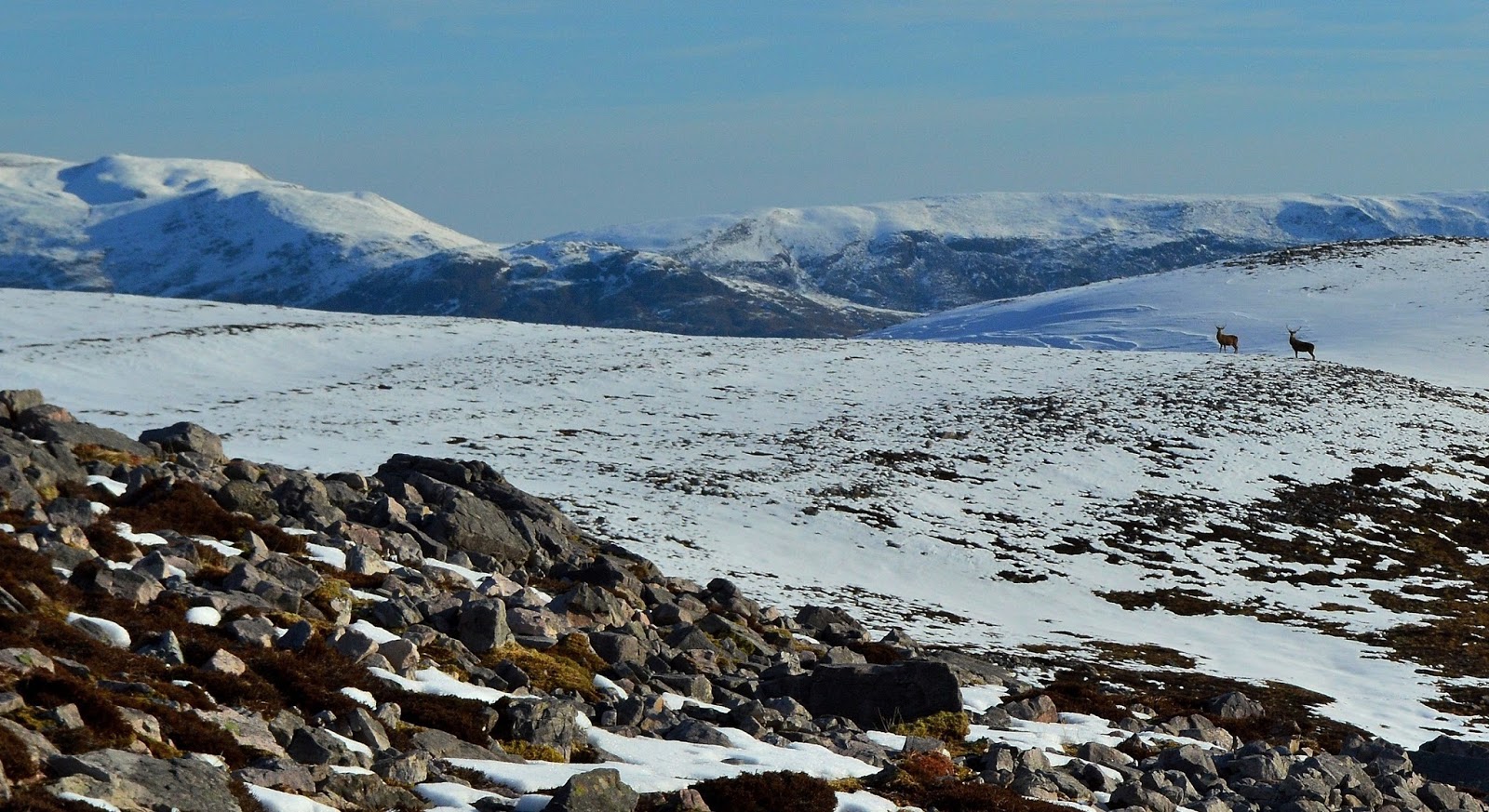